City of Angels is a musical comedy which weaves together two plots, the “real” world of a writer trying to turn his book into a screenplay, and the world of the fictional film. 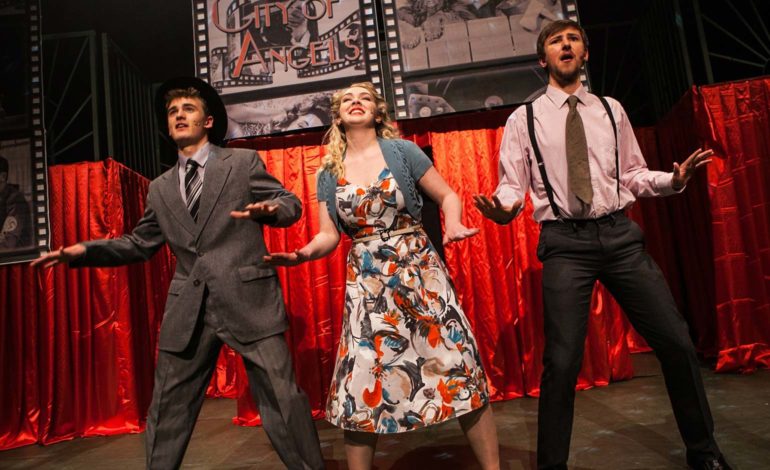 The musical is homage to the film noir genre of motion pictures that rose to prominence in the 1940s.

The score is outstanding, the excellent band under the baton of Roy Page allows the principal vocals to soar and capture the era with confidence and ease.

The huge company, under the direction of Scott Rogers work hard to capture the spirit of the ever changing plot. The central performances are excellent. Ed Corbishley is an assured Stine, the maligned writer his vocal delivery showing great maturity.

Alongside Stine is Stone the private detective who appears in the film. Marcus May has the perfect manner, his vocals and presence ensuring the central plot is in safe hands. George Miles as the bombastic Buddy is great fun and a commanding performance.

The principal girls: Georgie McSherry, Beth Hungar and Caitlin Mazza combine to offer mature and focused performances showing the depth of talent in the group.

They are also picture perfect with great attention to hair and costume reflecting the nature of the film industry of the time.

This is a good production; the static set works well and is atmospherically lit by Luke John Emmett capturing the shifts from real life to the glamorous world of film.

City of Angels was a Zenith Youth Theatre Company production at Kingswood Theatre in Bath.