The Bath Conservatives have issued an apology via their Twitter account following an ‘ill-judged’ tweet sent out yesterday, Saturday 17th February, regarding the challenge of food poverty in the area. 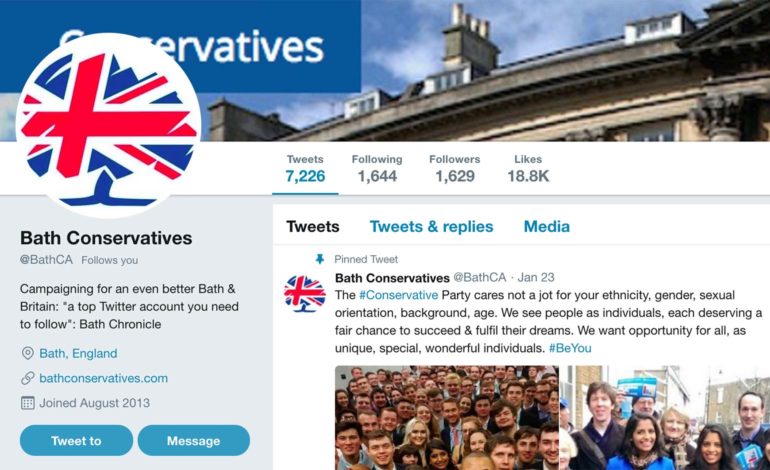 During a debate with the Green MP candidate for Bath, Dominic Tristram, the unknown person behind the Bath Conservatives Twitter account @BathCA responded by saying: “The reality may be indolent or disfunctional [sic] parents or more likely parents who simply don’t know how to feed their children well. If absolutely-not-a-Tory Jack Monroe @BoostrapCook could feed herself & her child for £10 a week – not easily, but adequately, most people can”.

The remark caused outrage on the social network, with many commenting on the tweet, including reactions from local residents such as ‘truly sickening’ and ‘utterly shameful’. 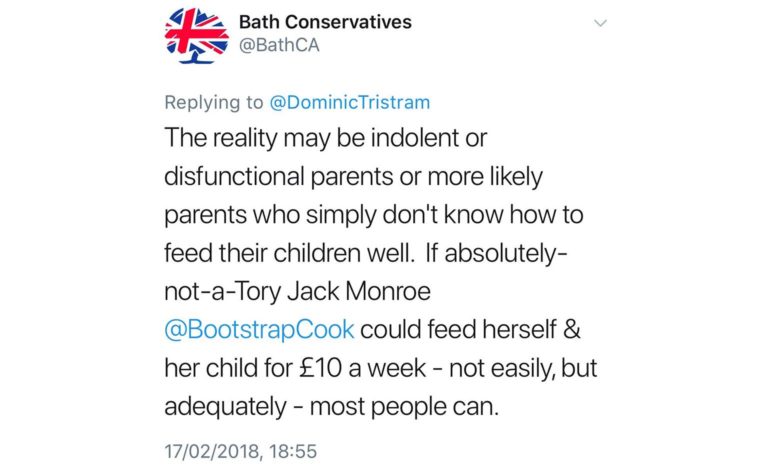 The tweet referenced Jack Monroe, a British food writer, journalist and activist, well-known for campaigning on poverty and hunger relief. She initially rose to fame with her blog, Cooking on a Bootstrap, which provides advice on creating food on a budget.

Monroe posted a response to the Bath Conservatives on her website, labelling the tweet a “frankly audacious message”.

She added: “These Conservatives decided, in their wisdom, to uphold me as an example of someone who could cook well on a meagre budget. Put like that, you may wonder why I exploded in cold fury.

“The premise of the tweet from Bath Conservatives was that parents who do not cook beautiful, bountiful meals from scratch are lazy, uneducated, unskilled and dysfunctional.”

The poverty campaigner has challenged the person behind the Bath Conservatives account to live on £10 a week for three weeks.

She said: “I am offering the social media person from Bath Conservatives an opportunity to quite literally put their money where their mouth is. Identify yourself, and live on just £10 a week for 3 weeks running. I’ll help you write recipes. You’ll eat a lot of beans and rice.

“You shouldn’t have to cheat, as you believe it is ‘adequate’. Do it, with no money for drinks, nights out, socialising, no friends to cook you meals, nothing but the £10 you think is so easy to live on.

Yesterday an ill-judged comment was made on our Twitter account re. the challenge of food poverty. The content didn't accurately reflect our views or approach & we apologise for any offence caused. We continue to seek ways to reduce the blight of child poverty in our City.

It isn’t the first time the Twitter account run by the Bath Conservatives has caused controversy, with many objecting to a variety of comments made last year.