This new show from Bath’s own Natural Theatre Company takes place, unusually for them, in an actual theatre! 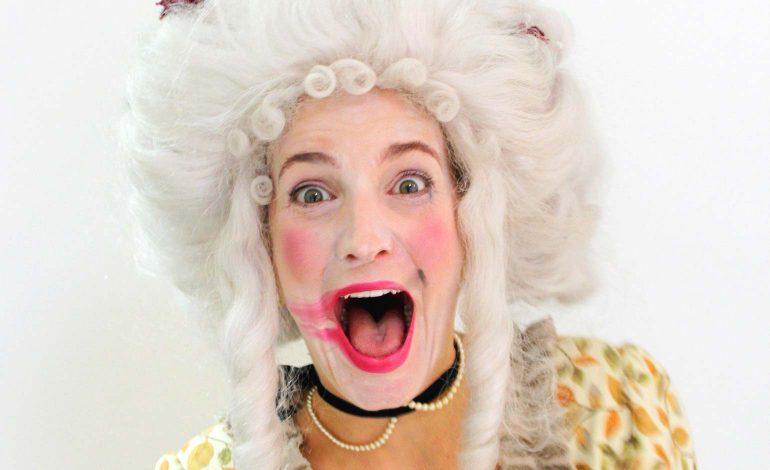 They’re more often seen in the streets, shopping centres, and, well, outdoors or indoors in places that aren’t theatres.

The style of this romp through the well-known and less well-known history of Bath has lots of echoes of that. Straight theatre this isn’t.

The show kicks off even before it kicks off, with the cast of three young women (Alison Campbell, Amy Vickers, and Florence Espeut-Nickless) dressed, or rather undressed, in Georgian ladies’ underwear, running about, chatting to audience members as they arrive, and generally just messing around.

The show itself, as its title implies, aims to dig up as much historical salaciousness as possible, and there’s lots of illicit sex, toilets, and drunken bad behaviour along the way.

The three irrepressible performers constantly change costume from the racks of clothes at the back of the stage, and aren’t bothered by changes of gender – even encouraging audience members to play characters of genders that they aren’t. Yes, folks, there’s lots of audience participation.

But the real joy of the show is in the performing skills of these three. Underlying their apparent shambles onstage is a sure-footed comic timing, and a great rapport between them.

It’s hard to tell when they’re making it up as they go along, and when they’re not, but it doesn’t really matter; they’re always in command of the stage, and there is never the slightest of dull moments – whether they’re doing duelling Georgian twits, angry Beau Nash, sex between soft toys (you had to be there), or just bantering with each other and the audience.

Dirty Bath, presented by the Natural Theatre Company, is showing at the Rondo Theatre in Bath until Saturday 14th March.