On Tuesday 5th December, the Helen Straker Charity announced it has raised £72,000 during 2017 in aid of two charities, The Forever Friends Appeal and Dorothy House Hospice Care. 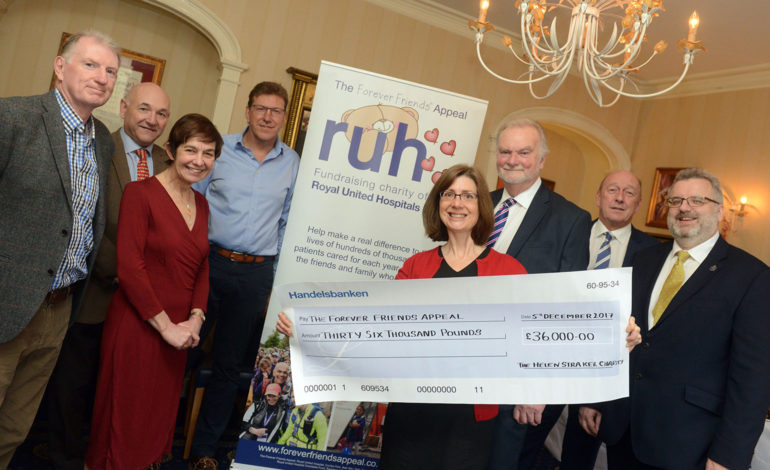 Both charities received £36,000 each at a cheque presentation held at The Bear Hotel in Devizes as they were the two favourite charities of Helen Straker, late wife of Gordon Straker, who died in 2013 and was an active fundraiser throughout her life.

This year’s fundraising total by the Helen Straker Charity was raised across the year at a number of events including their annual golf day and clay pigeon shoot plus a generous contribution from the Devizes Lions Club.

This follows another great year of fundraising last year when the Helen Straker Charity raised a total of £80,000.

A proactive fundraiser for both the new Cancer Centre which will be built at the Royal United Hospitals, (RUH) Bath and Dorothy House Hospice Care, Helen Straker sadly lost her brave fight against cancer in 2013.

Gordon Straker, Trustee of the Helen Straker Charity said: “My thanks to all the companies, individuals and sponsors who supported the charity this year.

“Well done to all involved it’s a great achievement. We are proud to have raised £72,000 in funds for Helen’s two chosen charities this year as her aim in life was to help others and it is very satisfying to be able to continue her legacy as she would have wished.”

Jan Witt, In Memory & Legacy Officer, The Forever Friends Appeal said: “On behalf of the Appeal, I personally would like to thank the Trustees of the Helen Straker charity for their continued support, commitment and raising funds for the RUH’s pioneering new Cancer Centre which will provide a highly beneficial healing environment, transforming care for patients and their families.

“In recognition for their superb fundraising efforts totalling £150,000 in just three years, the Helen Straker Charity are now Principal Family Partners of The Forever Friends Appeal, meaning they will have a naming opportunity for one of the specialist areas or departments within the new Cancer Centre.”

Phillippa Watson, Head of Fundraising at Dorothy House Hospice Care said: “Many congratulations to the charity for raising such significant funds once again in 2017, it is greatly appreciated and will help Dorothy House continue to provide specialist care for people living with a life-limiting illness.

“We are extremely grateful to Gordon Straker, the charity Trustees and to the Devizes Lions Club this year for all their hard work and fundraising efforts.

“Dorothy House cared for Helen during her battle with cancer and we’re proud to remain a beneficiary of the Helen Straker Charity.”