Volunteer Police Cadets and a young man who rescued a lady from a canal were amongst those recognised with ‘PCC Pride Awards’ by Police and Crime Commissioner (PCC) Sue Mountstevens. 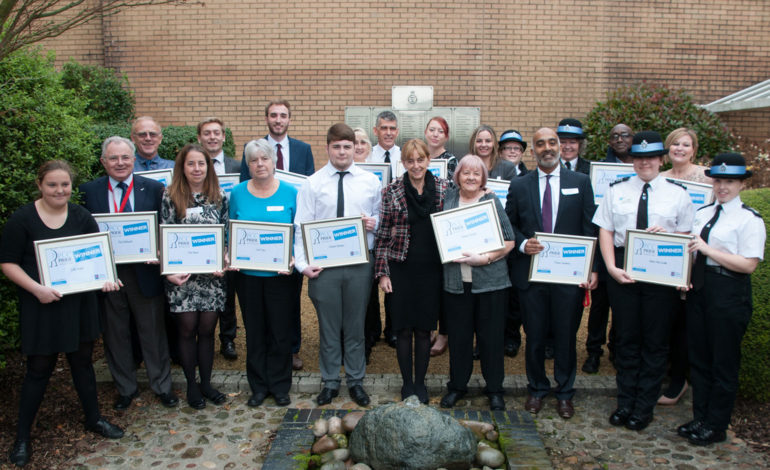 Taking place at Police and Fire Headquarters in Portishead, 16 worthy winners were presented with PCC Pride Awards, before recipients and their guests were invited to have lunch with the PCC and Chief Constable Andy Marsh.

PCC Sue Mountstevens said: “I consider it one of the best bits of my role, hosting the Pride Awards and hearing more about how local people are going above and beyond in their communities.

“I am delighted that so many people have chosen to nominate these ‘silent stars’, all who go about their daily business with little or no recognition.

“These awards highlight just some of the very special individuals we have living and working amongst us and their exemplary efforts are hugely appreciated across Avon and Somerset.

“It’s important we take the time celebrate these inspirational and selfless individuals, who work hard to help keep our communities’ safe and feeling safe.”

After the presentation of Pride Awards certificates, followed by afternoon tea, the winners and their nominators, families and friends were taken on a tour of the Force Service Centre, where ‘101’ and ‘999’ calls are received.

Ellen Marsh was nominated for her dedication as a ‘Baby-Bank Network’ volunteer, supporting the Bristol-based charity in supplying baby essentials to those who could otherwise not afford them. Ellen said: “I didn’t know I was nominated and to win was fantastic. I’ve been volunteering for the past 2 ½ years, doing about 5-10 hours a week and I absolutely love what I do.”

Somerset Youth Coordinator, Kate Blackburn was recognised for her work in supporting this year’s National Police Dog Trials, by involving over 500 schools in the event.

Speaking about receiving her Pride Award, Kate said: “It’s great that people are being rewarded for ‘good work’ but equally great to share the experience with so many other worthy nominees that are achieving great things within our local communities.”

Volunteer Wayne Griffiths was nominated for his involvement in the Bright Outlook Programme, which aims to target young people on the periphery of crime.

He said: “I was shocked to receive the award for doing what I feel passionately about. I talk with children aged 11-16 giving them an intervention about drugs and crime, so that hopefully by the time I finish speaking with them, they’ll choose a life away from crime.”

Will Harris was awarded following an act of bravery that saw him rescue his nominator from a canal without hesitation, after she lost control of her bicycle, fell into the water and was unable to get out.

Will said: “I feel very honoured to be amongst other volunteers and people who have done amazing things for their community. I’m very proud to be included in part of something where people are recognised for the work they do in the outside world.”

Jake Derisz and Michael Robinson were nominated for their commitment to supporting the Kelston Road community football project in Keynsham.

Speaking about the award they said: “It feels good to be recognised for doing something we love. Nick our nominator inspires both of us and we now both work in sport because of him. We will keep going with this and try to branch out to more communities!”

The Street Volunteer Police Cadets have been nominated as a Unit for their collective efforts and dedication to their voluntary role. Representatives from the Unit, Laura and Millieanne said: “We’re honoured to accept this ahead on behalf of the Unit, as it shows what together we do and how we’re happy to be able to serve our community.

“As a Cadet, you learn some brilliant skills, such as First Aid training and we have all recently become Dementia Friends.”

Receiving six separate nominations, Barbara Thomson, was nominated for her efforts in running Somerset Souls, a community group which brings together the community to help those who are isolated or lonely.

“Barbara said: “The whole reason my group is called Somerdale Souls is because I put my heart and soul into it. I just hope that more people now understand the issues I try to help, such as loneliness and homelessness.”

Zoe Hill runs a fibromyalgia research UK support group and has been nominated for her dedication to helping those who suffer from the disease, she said: “I’m absolutely honoured to be recognised for what I do, you don’t realise how much your work can affect people, but I really don’t do any more than anyone else would do.”

Councillor Rex Eastment was awarded for working tirelessly over the past 20 years on behalf of his community to make the parish of Norton St Philip a safer place for all who live there.

Speaking about the award he said: “This award isn’t just for me, but for all of the people that support and help from both of the villages I work in.”

If you would like to nominate someone for a PCC Pride Awards, visit www.avonandsomerset-pcc.gov.uk/Take-Part/PCCs-Pride-Awards.aspx

People are encouraged to put names forward as nominations for the PCC’s Pride Awards.  The Awards are open all year round and decisions will be made quarterly.