Local residents are this weekend remembering the devastating bombing that Bath suffered during the blitz of the city by German airmen back in 1942. 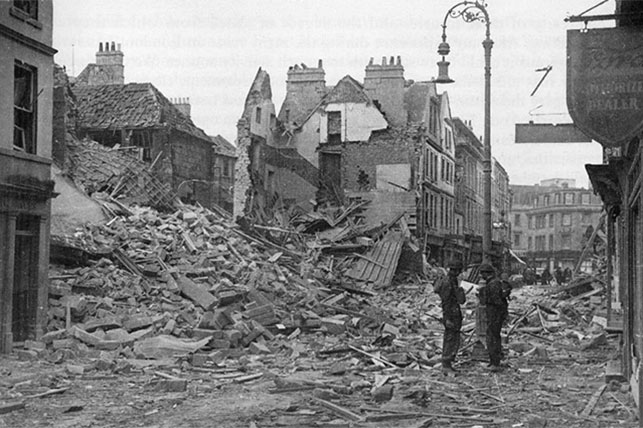 The bombing of Bath on 25th and 26th April 1942 has now commonly become known as the Bath Blitz, which was part of a number of retaliation bombing raids by the Luftwaffe.

Over the two days, 19,000 buildings in Bath were damaged by the intense bombing, with 1,100 being severely damaged or destroyed, and 417 people lost their lives.

Between the 25th and 27th, Bath was unlucky enough to suffer three bombing raids with 80 Luftwaffe planes leaving northern France to come to the city.

The first bombing raid took place at around 11pm on the Saturday night, and continued relentlessly until 1am.

Though air raid sirens sounded across Bath, many local residents believed that the planes were heading for Bristol to continue their four month run of bombing the city.

The German bombers flew back to France to refuel and rearm and were back in Bath at 4.35am early on Sunday morning.

The destruction caused by the first raid had caused so much fire that the aircraft could now easily spot their targets across the city.

They completed their bombing mission with machine-gun fire down the streets, damage from which can still be seen on the old Labour Exchange building in James Street West.

One of Bath’s greatest losses during the blitz was the Assembly Rooms, which was completely destroyed by the German bombers. It had only been restored a few years earlier after years of neglect.

A 500kg bomb dropped onto Queen Square, destroying 24 metres of the frontage of the Francis Hotel. Many of the hotel guests and staff had taken shelter in the hotel’s basement and casualties from the large bomb remained low.

During the weekend of raids, Bath lost nearly 1200 homes and the majority of churches in the city had been bombed beyond recognition.

You can see a large number of images relating to the Bath Blitz on the Bath In Time website here.