Bath Carnival is on a knife-edge between “disappearing or blossoming into the crowning jewel for the city”. 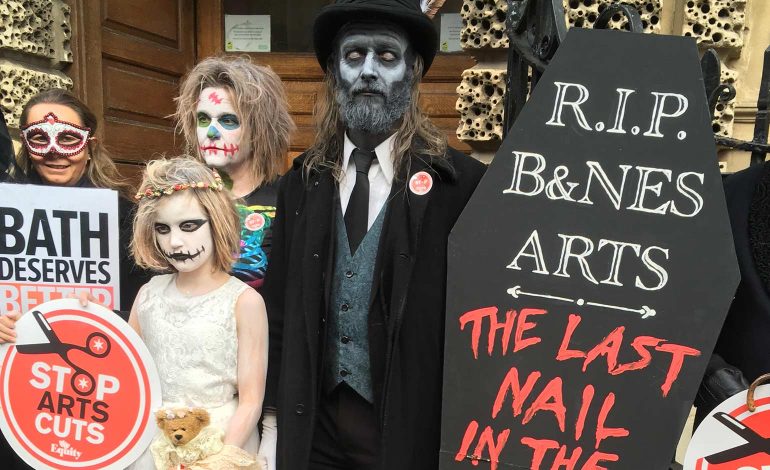 The annual event attracts 30,000 spectators and is the culmination of months of engagement with often hard to reach, disadvantaged groups.

Organiser Stu Matson said cuts to arts funding put that at risk, but it should be recognised as one of the few inclusive occasions that brings all walks of life together.

He was not alone – other creative minds have highlighted the challenges they face, with warnings that the arts are at risk of becoming “very white, very middle class”.

Mr Matson said: “What would be the cultural cost of losing the carnival if we don’t have the funds to do it? It’s becoming ingrained in the identity of Bath.

“The city deserves one day of the year where everybody comes together and celebrates.

“Our costs for the upcoming year are just under £100,000. If our Arts Council bid is successful, we’ll be just under halfway.

“Every single volunteer, artist and industry professional that commits to another year is doing so in the knowledge that it’s not 100 per cent until we reach the finish line. That’s a horrible position to be in.

“Are we going to tackle the issues or just watch another arts organisation disappear, or another free event become ticketed? Even a pound would be too much for some people.”

There were protests when Bath and North East Somerset Council cut its art funding.

Demonstrators were back on the streets for an ultimately unsuccessful bid to save the authority’s arts development team – the duo were described as the glue that holds the city’s culture together.

The department closed earlier this year.

The council has been supportive of Bath Carnival – it awarded two grants totalling £8,000 and helped the organisers secure an artist studio in Twerton.

They also benefited from reduced rates, but Mr Matson said those discounts are no longer on offer.

“We have a really good relationship with individuals in the council and totally understand their budgets are being squeezed,” he said.

“Bath Carnival is the only event of this size in the city that’s completely inclusive. That should be acknowledged.

“I’m not expecting any direct investment. The council should have a holistic approach and should be able to factor into their budget that there would be a contribution.

“It’s such a fine line between this disappearing or blossoming into the crowning jewel for the city.

“The plans for next year will be amazing. There will be an eco-conscious theme. It’s going to be spectacular.”

Director Luke Emmett was among the protesters against the council’s art cuts, and said their fears had been realised.

He said: “There’s no work. It’s gone ridiculously quiet. We knew that would happen. There are pockets of things happening but they’re on a shoestring. They’re all counting the pennies.

“I’m looking for jobs outside of Bath. The work is just not there any more. Before all the cuts and austerity, there were concessions.

“Because of the big deficit in the budget, the council is now charging top whack for its services. They’re forced to make up the shortfall.

“Sponsors don’t want to pay if it’s just going straight to the council.

“If something doesn’t change, there will be art here but it will be very white, very middle class, and not particularly diverse.

One group that has been able to get money out of the council is Bath Festivals. The organisers applied for a loan and were awarded a £75,000 grant to help it become sustainable – on the proviso that it widens its audience.

Ian Stockley, chief executive of Bath Festivals said: “Funding has been a challenge faced by the festival since it began in 1947.

“As an arts charity, we rely on the support of sponsors, trusts and patrons. Growing ticket sales is also vital.

“Transitioning to the wider appealing large-scale community based combined arts festival in May without this one off grant [from the council] would have taken longer.”

Councillor Paul Crossley, cabinet member for communities, said: “The carnival plays an important role in Bath, it supports local charities and provides arts-based workshops and learning opportunities throughout the year to people across the city.

“As a result, the council continues to support and champion the carnival in a variety of ways from identifying premises in Twerton, assisting with the lease and providing business support.

“The carnival also benefited from the council substantially reducing the rate payable for the use of Sydney gardens.”

He said the council supports the arts in different ways, including the grant it paid to Bath Festivals and leasing empty shops to artists as pop-ups, and there is an artistic element to its museums.

Councillor Richard Samuel, cabinet member for resources, said: “Any changes to current arrangements for the arts will be made as part of the budget for next year which is currently in the course of preparation.”