Properties in the centre of Bath that are flooding or filling with gas will face a two-hour wait for an emergency callout under proposed new anti-terrorism measures. 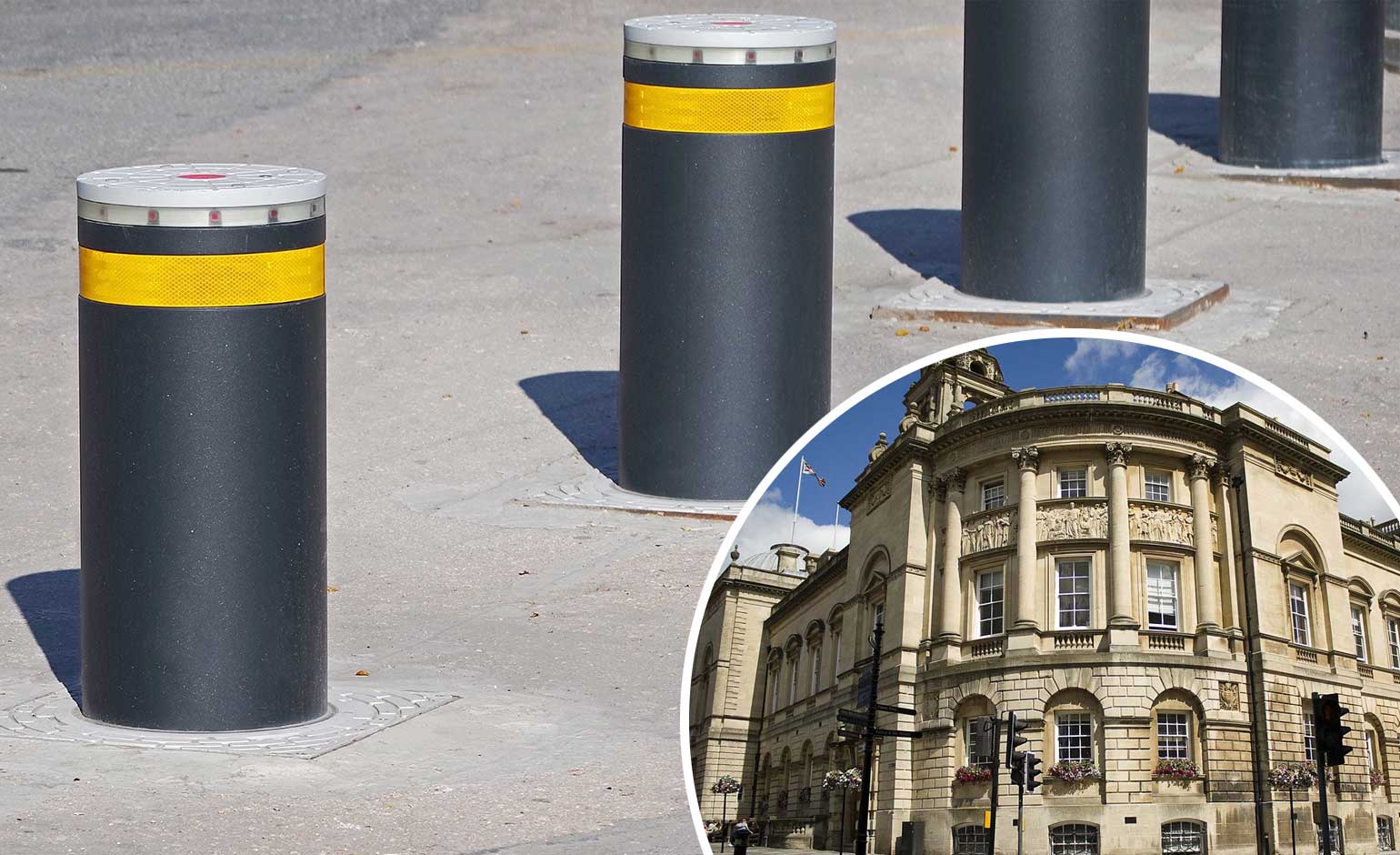 Moving bollards will be used to restrict access | Inset: The Guildhall in Bath

Tradespeople and utility companies would need to give advance notice before they can get past new moving bollards to attend homes or businesses in an emergency, and blue-light services would also need the go-ahead from council officials for urgent access.

Critics said the measures to protect crowded streets around Bath Abbey and the Roman Baths from hostile vehicle attacks could cost valuable time, with one warning “a gas leak explosion is a bigger risk than a car bomb”.

The original scheme restricted access 24-seven and removed all parking, including for blue badge holders.

Under the revised proposals – which are set to cost £2.7million – controls will be in place daily in Cheap Street, Westgate Street, Saw Close and Upper Borough Walls from 10am until 6pm, and until 10pm in York Street.

During those hours, blue badge holders will have to show their cards to get in or out of the zone, with more controls in place for their carers or taxi drivers dropping them off or picking them.

Blue badge holders will be able to park for up to three hours on double yellow lines in some restricted streets, more disabled parking will be created outside the secure area, and additional seating will be provided to ensure adequate resting space.

Other vehicles would also be affected.

Bath and North East Somerset Council previously said tradespeople would be forced to park outside the zone and bring their kit in on trolleys.

The proposed anti-terror traffic regulation order (TRO) now says an application for access should be submitted as part of the initial planning and assessment, and then contractors must give 24 hours’ notice of every vehicle coming in.

And it says film crews and anyone planning an event, moving house or getting a big delivery will have to apply for access and give 10 days’ notice.

The only delivery vehicles allowed into the secure zone will be Royal Mail and Parcelforce, allowing them to handle mail from the Post Office in Union Street.

The council’s vehicles will be able to access the restricted streets at any time.

The national threat level was reduced to “substantial” in February. If it is upgraded to “severe” or “critical”, or if there is a suspected, ongoing or recent terrorist incident, vehicles and users normally exempt from anti-terrorism TROs such as blue badge holders might then become affected.

Transport cabinet member Councillor Manda Rigby said: “This scheme involves proportionate, preventative measures to protect public safety, based on police advice that such a scheme needs to be introduced.

“To reduce the risk to our city we have to act on this advice and the findings of the counter-terrorism survey that this area of Bath is vulnerable.

“However, we also have to make sure local residents, businesses and people with accessibility issues have a say on the traffic orders.

“We acted on the feedback received in our previous consultation and have amended the scheme accordingly, so this consultation will ensure we get the traffic orders right.”

The council is consulting on the TROs until 14th October.

If approved they would be in effect any time from December, but work to install barriers will not start until next summer.

The council plans to consult further with user groups on the access operation and management of the permanent arrangements, to ensure they are safe but simple to access.

You can click here to respond to the consultation.