A special initiative which is helping to make the RUH in Bath a more dementia-friendly hospital has proved so successful it is being copied throughout the country. 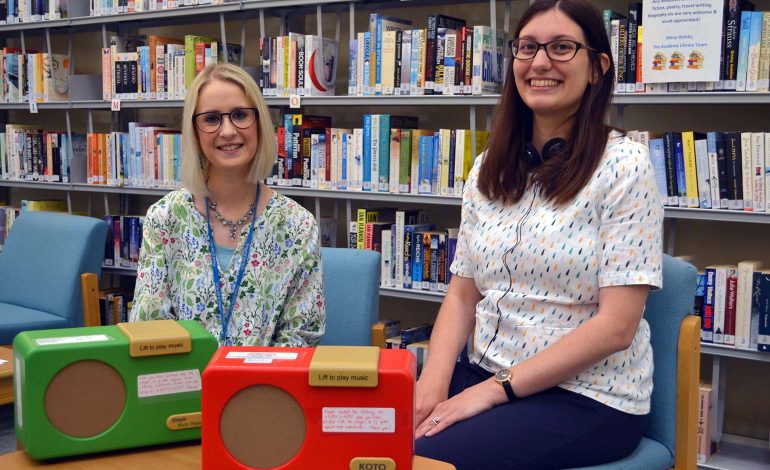 Patients with dementia now have the chance to listen to audiobooks, plays and TV and radio shows during their stay at the RUH.

The aim of the initiative is to keep patients stimulated and engaged, while helping to relieve some of the boredom of being in hospital.

Head of Library and Knowledge Services, Jason Ovens, said: “We are the first hospital in the country to introduce audiobooks for patients with dementia and it’s proved so popular we’ve had calls from other hospitals up and down the country asking for more information.

“The idea behind this award-winning initiative came from the library team and we’re very proud that it’s been such a success.

“It’s all about improving the patient experience – we’ve been told that patients with dementia are much more rested and less agitated because they have something to listen to.

“The feedback from both staff and patients has been very positive.”

Once a member of staff tells the hospital’s Academy Library that they have a patient who would benefit from an audiobook, the library staff get to work downloading the content for them.

The patient or family member can suggest topics that are of interest and the library staff will do their best to find a close match.

The library has access to hundreds of audiobooks, along with audio of old TV and radio shows, such as Only Fools and Horses, The Goon Show and Desert Island Discs.

The shows are then loaded onto an easy to use audio player which is given to the patient, along with a pair of headphones so as not to disturb other patients.

The audio player, known as a Simple Music Player, was created by Designability, an independent charity based at the RUH, which designs products for people with disabilities.

Hazel Boyd, User Interface Engineer at Designability, said: “The Simple Music Player was developed for and with people with dementia, to be easily used by people who cannot remember how to work other music players.

“It is also easy to use by people without good dexterity or vision, enabling a wide range of people to access music independently.

“We are delighted that this access to audio content has been increased even further by this excellent audiobooks initiative by the RUH library.”

The project has proved so successful that it’s being rolled out across other departments at the RUH.

In addition to dementia patients, it’s also proved a success with people who have had a stroke and have difficulty holding a book, the visually impaired, patients admitted to hospital suddenly and who haven’t had time to pack any personal belongings and also for patients who are having trouble sleeping.

It hasn’t taken long for word to get out about the initiative and it’s now being replicated at hospitals across the country.

Jason said that detective novels and some of the classics were among the most popular requests, but there was one patient who was a huge fan of a particular rock group.

“It was Bon Jovi and they wanted as much as possible about the group. We couldn’t provide them with the music, but we managed to locate some podcasts and I think that did the trick!”