A father-of-two has been reunited with the off-duty doctors who saved his life when his heart stopped beating at his local squash club in Bath. 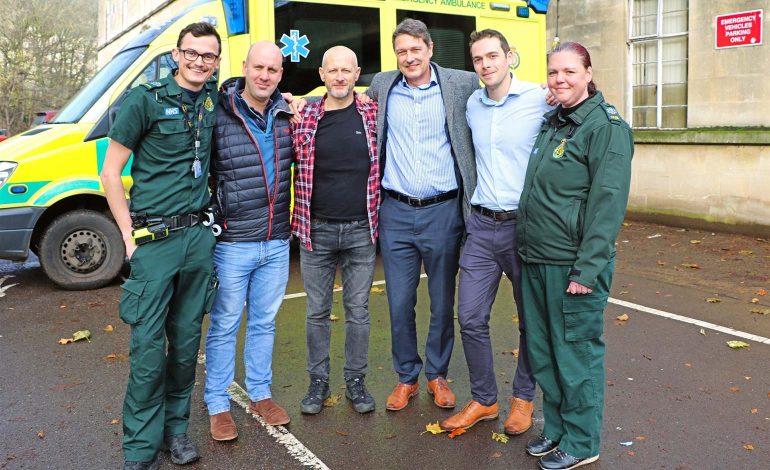 John Savage, 56, from Bath, went into cardiac arrest during fitness training at Lansdown Tennis Squash & Croquet Club in the Northfields area of the city on Sunday 13th October.

He carried-out CPR with Dr Richard Dixon, and they gave John three shocks with a defibrillator.

John soon regained consciousness and has gone on to make a fantastic recovery.

John made a special visit to Bath Ambulance Station on Tuesday 26th November to thank his lifesavers in person.

He said: “I felt my heart flutter and thought it was going to pass out. The next thing I remember is Paramedic Ed leaning over me. I felt like I was in the eye of my own storm.

“There was a lot of concern for me, but I’m practically back to normal now.

“I survived because of the great response and treatment I received. I’m incredibly lucky to be alive.

“I’m not religious, but it’s miraculous.”

Dr Byron said: “It was an upsetting event. But I went into autopilot, and thankfully the ambulance crew arrived quickly.”

999 Call Handler Vicki Hodgon and other staff in the Control Room organised for crews to respond to the emergency.

Paramedics Ed Hill and Rosemary Cherry treated John at the scene, and conveyed him to the Royal United Hospital in Bath.

They were supported by Paramedic Matthew Jenkins and Operations Officer Michael Anning.

John was transferred to the Bristol Heart Institute for surgery.

Ed said: “As we arrived John had just received his third shock and had begun making a recovery, resulting in him talking to us.

“This was such a fantastic example of early CPR and defibrillation which deserves recognition.

“I can’t describe the emotion of reuniting the patient with his two young daughters after his dad had been clinically dead for five minutes.”

“The quick action of bystanders and the prompt transfer to hospital have ensured the best possible outcome.”