Bath will soon be a riot of colour as more than two hundred hanging baskets are put up across the city using water-saving containers, which are expected to save thousands of litres of water. 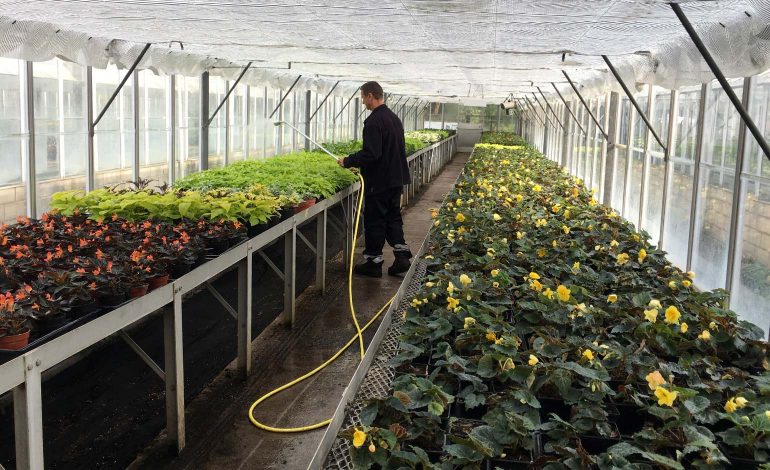 Most of the baskets have been ordered by private retailers, but the nursery is also providing sixty bespoke baskets funded by the business community via Bath Business Improvement District Company (Bath BID).

As an on-going commitment to sustainability, the team has looked to reduce the use of moss, peat and water and so the baskets are now made from plastic with a built in water reservoir.

It’s the second year the sturdy, reusable baskets have been used, and they impressed the South West in Bloom judges who awarded Bath BID Gold for their entry last summer.

Mark Cassidy, Parks Team manager, said: “Wire framed baskets are not the most environmentally friendly option; they don’t retain moisture and so each year thousands of gallons of water are wasted maintaining the baskets over the dry summer months.

“In fact Britain in Blooms judges mark entrants down for using them as opposed to reservoir containers, and that could mean difference between success and failure in the competition given that the RHS is championing water conservation this year in an initiative called ‘Gardening with water in mind’.

The council’s Parks department invested in the new plastic baskets last year. They’ll be reused each year and should last between 10 and 20 years.

Thanks to the inbuilt reservoir the plants they contain are kept continually moist which means the baskets only need to be given around seven litres of water once a week.

Over their lifespan the plastic baskets save thousands of gallons of water.

Allison Herbert, chief executive of Bath BID, said: “The Bath BID is committed to having a positive environmental impact as well as improving the welcome for people using the city.

“The new style baskets conserve water, and we hope will demonstrate to the Britain in Bloom judges that we take our responsibilities seriously.

“As Bath BID is now representing all the South West BIDs in the Britain in Bloom competition, the stakes are high and we are hoping for a glorious summer of floral colour for everyone to enjoy.”

The hanging baskets will be installed across the city over the next few weeks, forming colourful displays throughout the summer.