Bath’s iconic Fashion Museum has been honoured for its work in celebrating the rich history of glove making in the UK and promoting the wearing of gloves. 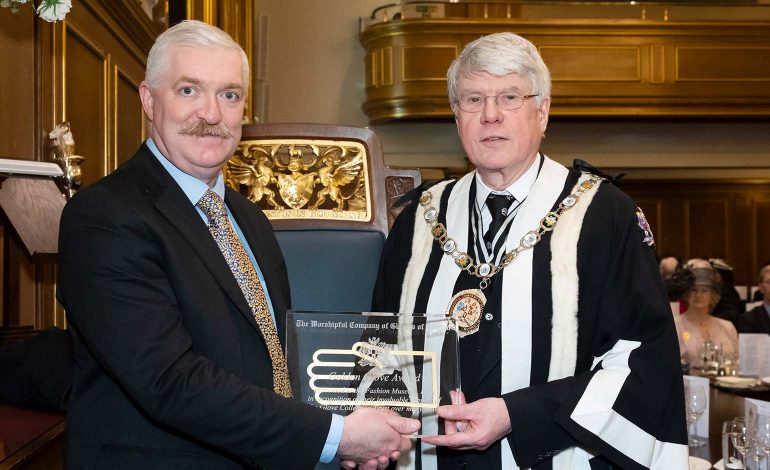 Rosemary Harden, Manager of the Fashion Museum, has been made an Honorary Glover by the Worshipful Company of Glovers of London.

Rosemary received the honour during a ceremony at Clothworkers’ Hall in London on Thursday 7th February 2019.

At the same time, the Fashion Museum was presented with a Golden Glove Award, which was accepted by Cllr Paul Myers on behalf of Bath & North East Somerset Council, which runs the Museum.

The status of Honorary Glover is given from time to time to an individual who has made an exceptional contribution to the Worshipful Company of Glovers’ aims and aspirations, while the Golden Glove Award was awarded to the Fashion Museum to mark the Museum’s outstanding celebration of the wearing of gloves.

Rosemary Harden said: “This is a great honour; and I should like to say a particular thank you to the Worshipful Company of Glovers of London for making these special awards to the Fashion Museum at this time.

“The Museum counts it a huge privilege to be entrusted with the care of the Company’s glove collection – arguably the finest in the world.

“These two awards reflect a long and happy partnership between our organisations, and the Fashion Museum looks forward to continuing to work with the Worshipful Company to find new and diverse ways of sharing the riches of the collection, and information about glove-making, with wider audiences.”

Councillor Paul Myers, cabinet member for Economic and Community Regeneration at Bath & North East Somerset Council, said: “Congratulations to Rosemary on becoming an Honorary Glover. It’s wonderful that the Fashion Museum has been recognised in this way by the Worshipful Company of Glovers, especially in the run-up to the opening of the Glove Stories display in March.”

The Worshipful Company of Glovers of London was formed in 1349 by glove makers in London who wished to protect the high standard of their craft.

It was granted its Royal Charter by King Charles I in 1638.

The Company maintains close links with the British glove industry, promoting the wearing of gloves and contributing to many charitable causes.

Its own charity, The Glove Collection Trust, has a world-class collection of gloves, which are cared for by and housed at the Fashion Museum.

Many of these gloves will go on show in the Glove Stories display, 2nd March 2019 – 1st March 2020, which will showcase the breadth and depth of the collection.

Visitors will see exquisite examples of historical gloves from the past 400 years, many of which have never been displayed to the public before.

Highlights will include beautiful embroidered gauntlet gloves from the 1600s, a curious pair of gloves in a walnut shell from the 1830s, and the Duke of Edinburgh’s carriage-driving gloves.

The exhibition will also touch on outer space with a Soviet cosmonaut’s glove and a pair of costume gloves from the Star Wars film The Empire Strikes Back.

The Fashion Museum, widely acknowledged as one of the top ten of its kind in the world, has a collection that is ‘Designated’ by Government, a status that recognises collections of national / international pre-eminence in non-national museums.