Bath-based Send a Cow has teamed up with Welsh charity, Dolen Cymru to help smallholder farmers experiencing drought in the African country of Lesotho. 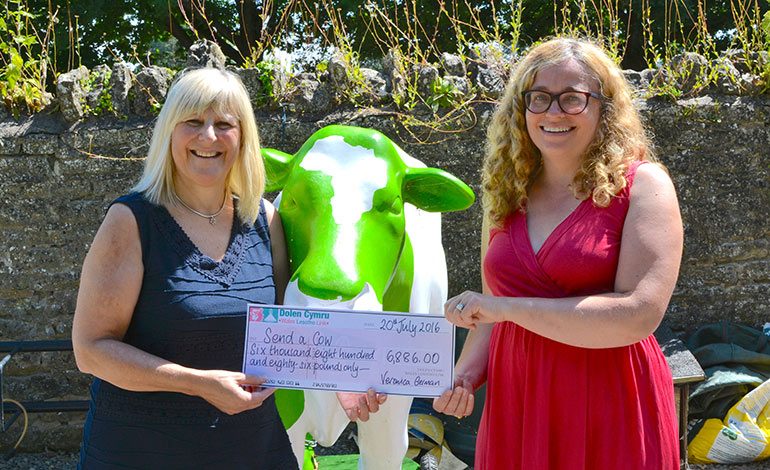 The two charities decided to work together to raise additional funds for the farmers who were facing crop failure.

Representatives from Dolen Cymru visited the Bath charity’s office this week to officially present them with the cheque for £6886 but soon discovered that a further £2000 had been donated.

This took the total raised by Dolen Cymru supporters to just under £9000. This was kindly match funded by the Waterloo Foundation, an independent grant making foundation in Wales, who donated a further £10,000 to Send a Cow’s work in Lesotho.

Vickie Wood, Fundraising Manager at Send a Cow said: ‘‘Drought in the country was becoming so severe that water sources were completely drying up, killing livestock and destroying precious crops.

“As a charity we were already working with poor smallholder farmers in the country but the weather conditions were so extreme we needed to intensify our work and offer additional support and resources to help people survive.

‘’The money raised by Dolen Cymru and matched by the Waterloo Foundation is already being put to good use. Farmers have benefitted from extra seeds and been encouraged to focus on quick growing vegetables which can feed them and their families in just a matter of weeks.’’

Lesotho is a small, landlocked country completed surrounded by South Africa. At the height of the drought, an estimated 1 in 3 people were dependent on food aid and the prime minister officially declared a state of emergency.

Set up by West Country dairy farmers in 1988, Send a Cow doesn’t provide handouts but gives people the training, tools, seeds and livestock to grow their own food and teaches them techniques to help combat the effects of climate change.

Veronica German, Executive Director of Dolen Cymru said: ‘‘Wales has been linked to Lesotho for over 30 years through Dolen Cymru.  We have always promoted skill sharing and are delighted to support Send a Cow’s work on the ground bringing real practical help to families in need.’’