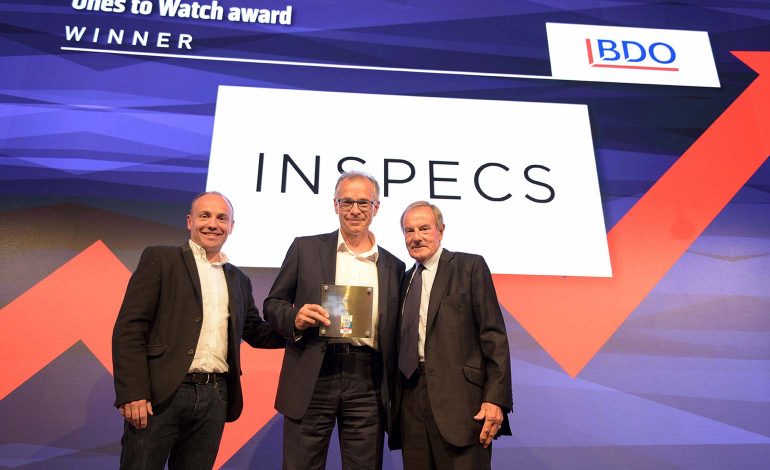 INSPECS was awarded the accolade at the 20th annual awards ceremony held at The Savoy in London.

The Profit Track 100 ‘Ones to Watch’ award, sponsored by BDO, was presented by David Buttress, chairman of the judges and UK co-founder and former chief executive of JUST EAT, to founder & CEO Robin Totterman and chairman Lord MacLaurin of INSPECS.

The eyewear designer and manufacturer works with brands like Superdry and O’Neill to produce 8 million frames annually.

Robin Totterman, CEO, INSPECS said: “This award is an incredible honour for INSPECS. At the start of the process, we were pleased to be selected as one of the ones to watch in the Times FastTrack 100.

“We were then further delighted to have been chosen as one of the top 10 to watch and featured in the Times last month.

“That was remarkable enough, but to win the award outright is a testament to the hard work and exceptional quality of our team, who have kept the faith in our ability to compete in the world arena.

“Our factories in Vietnam, China and the East End of London make us one of the few competitors to the all-powerful Italian conglomerates.

“Brexit-proofing the company two years ago by establishing a second European HQ in Lisbon was an important strategic move for us, ensuring we will be able to carry on even in case of a no deal Brexit scenario.”

The guests at the dinner included founders and senior directors from 103 companies, such as bet365, Gymshark, Princess Yachts, and River Island. Guests were welcomed by Paul Eagland, UK managing partner at BDO.

He said: “The correlation between the people who achieve a place on this league table and their future success is incredibly strong. By definition, you are all in grow mode and your journeys will be fascinating to watch.”

Robin Totterman continued: “Overall, I believe there is scope for genuine optimism despite the uncertain political climate, and not only for us.

“We were amongst hundreds of great companies defying the slowdown on the High Street and proving that the UK PLC is alive and kicking!”

INSPECS produces branded eyewear under license for Superdry, HYPE, O’Neill, Radley, CATERPILLAR and Farah, and supplies private label and house brands factory-direct from the Killine arm of the business.