The organisers of the Illuminate 2015 event in the centre of Bath are thanking the thousands of people who visited and took part, with some travelling from other countries to get involved. 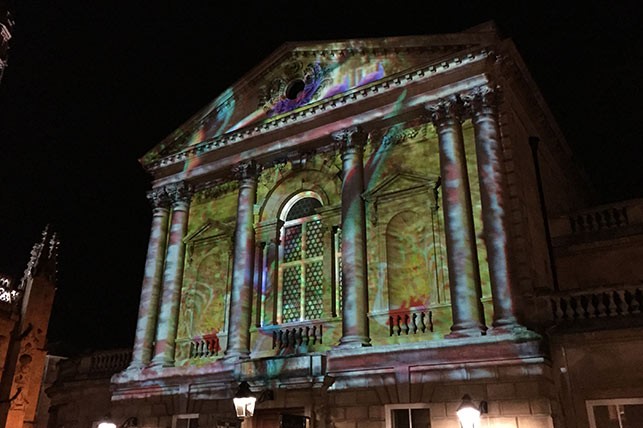 The event featured work from international artists including Canadian artist Leila Sujir who created a 3D projection starring Corsham Court’s famous peacocks that was projected on the entrance of the Roman Baths; Australian artist Lyndal Jones brought a new iteration of her piece Rehearsing Catastrophe #1: The Ark in Avoca to the Holburne Museum; and Georgian-themed animations created by Petra Freeman, Tim Rolt and St Saviour’s School Children danced across Pulteney Bridge.

Creative Director of Illuminate 2015, Anthony Head said: “All the hard work has paid off. As the week progressed, more and more people heard good things about Illuminate 2015 and came out to see it, sometimes over several nights.

“On Saturday we had over 10,000 people seeing the projections and performances, with perfect weather conditions. People had not only come from the city and the wider region, but from many countries too.

“I’d like to thank our sponsors who made the event possible by showing their support and having faith in us to deliver.

“Huge thanks go to various volunteer roles that were vital in the success of Illuminate, from the design and filming promotion work by Bath Spa University’s Artswork students, to the stewarding by students and non-students. More thanks go to the artists who made work and their friends who supported them.

“Illuminate 2015 has an element of experimentation to it. It was a public laboratory where we engaged the public in participatory and experimental artworks that are often affected by different weather conditions each night, or were enhanced by improvements in lighting conditions.

“As such, the people involved found it to be a learning experience and I hope that all the visitors appreciated the event and the fact that we were able to transform the streets for 8 nights, gaining new insights into what the city of Bath can be at night – a family friendly and creative city.

“Many of the artworks were playful and interactive, intending to make adults to lose their inhibitions about experiencing public art and many adults happily dived in. As Creative Director of Illuminate, playfulness is an important element of the artworks that I encouraged.

“Playfulness is a way of tangibly experiencing artworks and understanding them from an intuitive perspective. It’s not about ‘do not touch’.

“Now Illuminate is over, it is the time to think to the future, to raise financial support for future events, which are very expensive to run and make free for the public. We are small event when compared to other illumination festivals around the world, but if the people and businesses of Bath want it back and bigger, and for us to continue the international dimension, then let us know!

“It would be great if we could involve many more locations and artworks, but we’d need a step change in funding to do so.”