Plans to build flats next to a warehouse look set to be approved despite widespread fears for a 260-year-old Bath pub famous for live music. 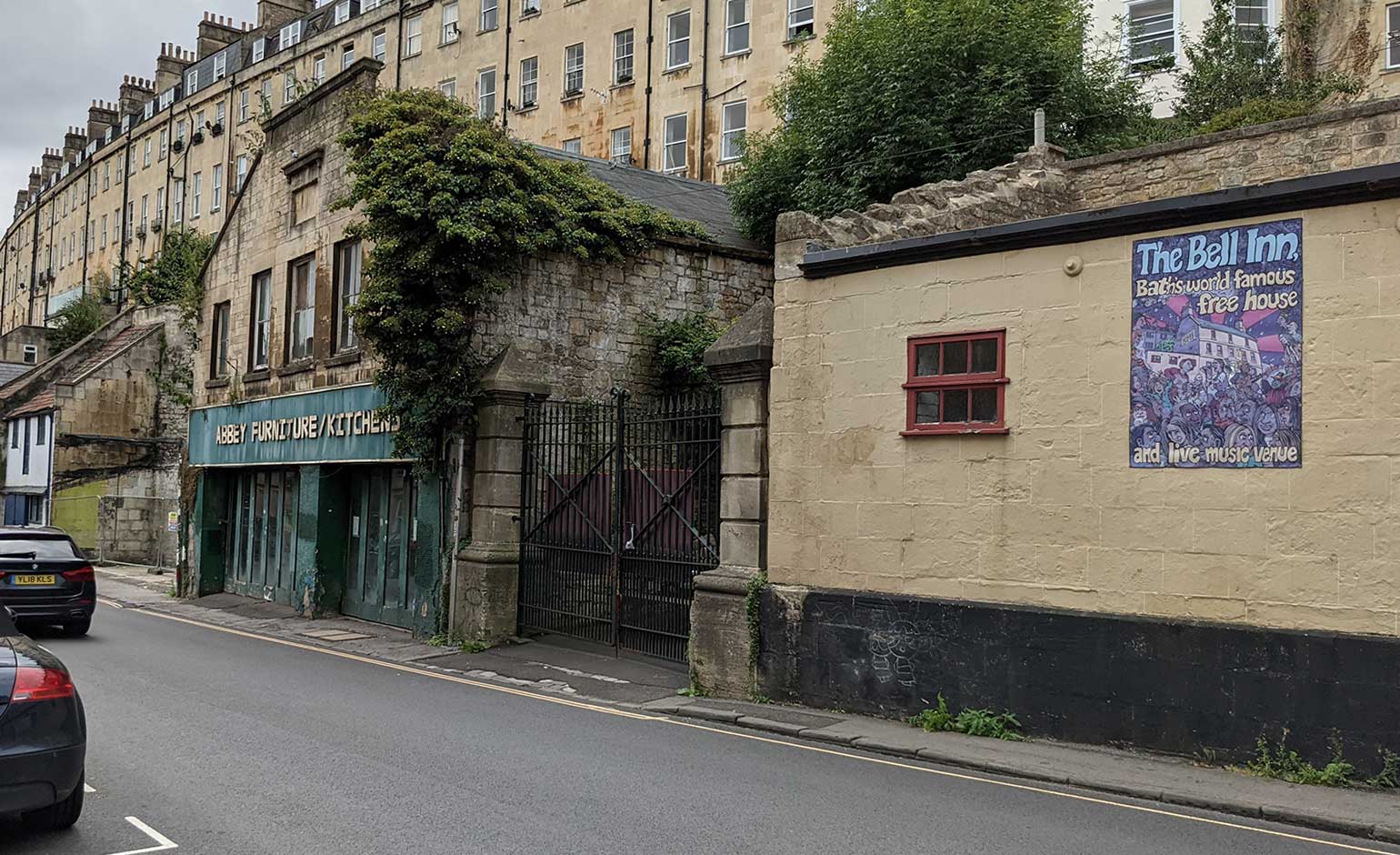 Abbey Kitchens and The Bell in Bath | Photo © Stephen Sumner

The Walcot Street premises have been left derelict and “dangerous” since Abbey Kitchens closed in 2015 and relocated to Kingswood.

The Genesis Trust’s £1.1million bid to create a shop, workshop and training facilities on the site was approved the following year, although it was not taken forward.

But it is the introduction of housing – just two flats – in new proposals that is causing concern.

Nearly 400 people have objected, voicing fears complaints from residents would threaten the grade II-listed Bell pub next door, which is owned by nearly 500 shareholders.

John Revell, a spokesman for The Bell, said in January after the plans were submitted: “We are concerned if flats come next door because we do not want noise complaints.

“We’ve been here 260 years and providing live music five times a week for 60 years when it’s not a pandemic.

“We’d like to see the site developed and have no problem with the commercial aspect but it shouldn’t be residential.”

Kerri Sant said: “The Bell is one of Bath’s finest venues for live music. Anything that puts live music at The Bell under threat would be detrimental to the community.”

Fellow objector Andrew J Towle agreed, writing: “Putting a residential site next to a long established, well run live music venue is wrong. It will only cause issues in the future.”

James Savage said: “This should only be allowed if a legal and lasting guarantee is given that it will never adversely affect The Bell.”

Harry Tedstone said if complaints curtailed live music at the pub it would “rip the heart out of it as a cultural entity and threaten its economic viability”.

Hylton Asplin added: “How can Walcot Street be the cultural quarter if there is no culture for it to perceive?”

In matching objections, Walcot councillors Richard Samuel and Tom Davies said: “Residential accommodation in this location would be inappropriate given the location of the development close to The Bell public house – a leading venue in Bath famous for its live music events.

“The building of residential accommodation next to this venue will inevitably result in conflict going forward and should be avoided by ensuring that any development approved in this location is for an appropriate use.”

The designs have also been criticised, with the Bath Preservation Trust saying the building’s height would be excessive and the roof heavy and over-dominant.

Supporters said the site is currently a dangerous eyesore and the Bell would benefit from the new residents who would be aware of its long history.

Under the proposals, the upper two levels of the warehouse will become offices, with the ground floor set to become a cafe.

The two flats would be in the top two floors of a new building on the adjoining vacant plot, with a commercial, business or service use at ground level.

Officers have recommended approval, citing the “agent of change” principle designed to protect existing music venues by placing the onus for mitigating the impact of noise on developers.

They said the proposed acoustic attenuation would provide suitable mitigation before the flats are occupied and residents will be aware of the proximity of the Bell.