Stars from the Theatre Royal Bath’s pantomime Beauty & The Beast met young patients and their families at the RUH on Wednesday, when they visited the Children’s Ward dressed in their costumes. 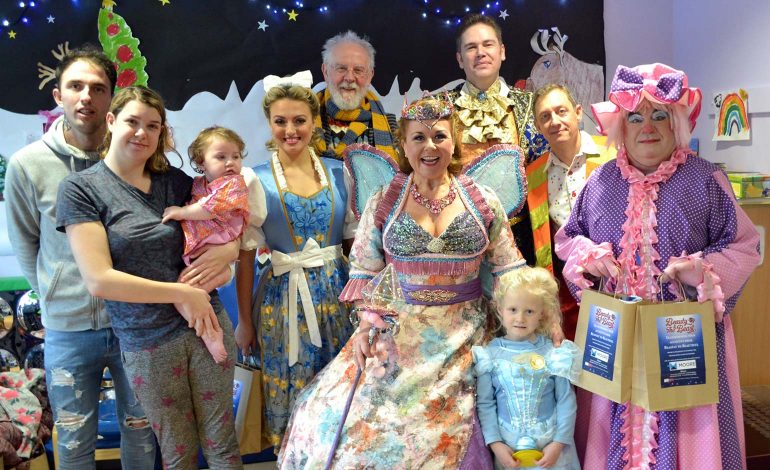 Star of stage and television Wendi Peters, who plays Fairy Bon Bon in the pantomime; actor and comedian Jon Monie, who plays Louis La Plonk and has also written this year’s award-winning panto script; TV and stage actor Nick Wilton, who plays Dame Polly La Plonk; Shaun Dalton who appears as both Prince Albert and The Beast; Clare Maynard who plays Belle and Marcus Knibbs who appears as Clement in the Theatre Royal Bath’s family show, spent time chatting to patients and staff on the Children’s Ward before returning to the stage for the matinee performance of Beauty & The Beast.

Wendi Peters, well known on TV for her roles in Coronation Street and Hetty Feather, said: “We really enjoyed taking a flavour of Beauty & The Beast from the Theatre Royal to the Children’s Ward and having a chat with everyone there.

“The hard-working staff on the ward are a constant source of inspiration, we can’t praise the job they do highly enough.

“We were given such a lovely welcome and talking to the children and their parents was a huge pleasure.”

Panto favourite Jon Monie said: “It was an honour to meet so many wonderful young patients today and the staff who are caring for them.

“It’s especially difficult being unwell and having to stay away from home over the Christmas holidays. Some of the children told us they’re looking forward to seeing the pantomime when they leave hospital, so it was lovely to meet them on the ward before they visit us at the theatre to see the show.”

The pantomime stars were introduced to patients and their families on the Children’s Ward and also visited the annual Boost Christmas Party for pre-school children with complex needs.

The cast were driven to the hospital in their pantomime costumes in a mini-coach generously provided by local company Berkeley Coach and Travel.

During their visit, they handed out goodie bags to the children, supplied by the pantomime’s Goodie Bag sponsor Bath-based accountants Moore.

RUH Play Specialist Jo Powell said: “Thank you to all the panto cast for making this a special day on the ward.

“Play and entertainment is a crucial part of the care we offer children and young people – it helps them while they are in hospital and can have a big influence on their recovery and overall hospital experience.”