The GWAAC helicopter is celebrating one year of saving lives across Bristol, Bath, North Somerset, Gloucestershire, South Gloucestershire and parts of Wiltshire. 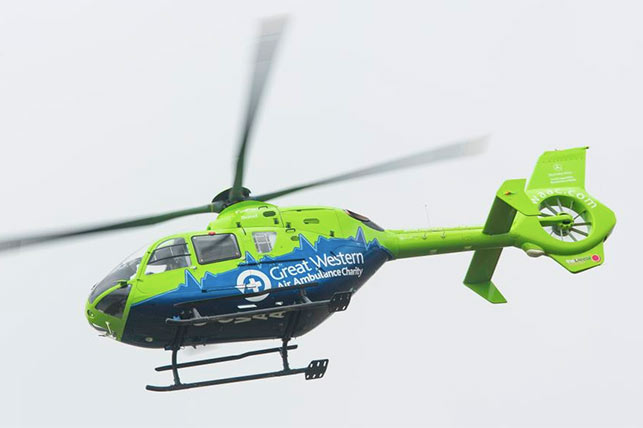 Since then she has carried out 648 missions, transporting a critical care paramedic and doctor to the scene of an incident, and flying seriously ill and injured patients to hospital.

At a time when speed is of the utmost importance HM65 and her crew have been there for hundreds of people at what is the worst moments of their life.

To celebrate her birthday, the charity held a party – presenting their crew with a card signed by grateful people across the region.

Head of fundraising and marketing, Emma Carter said: “Our EC135 has made a huge difference to the care we are able to provide, and we are delighted with it.

“The number of jobs we have attended show just how vitally important it is that we have a helicopter that is equipped to help our crews deal with the serious cases they see every day.

“Happy birthday HM65, and here’s to many more years of our helicopter and crew being there for people who need help the most.”

Since her arrival HM65 has transformed the care on offer to patients, and improved access to hospital helipads.

In Bath she has attended 49 incidents, including a female hit by van, a child with a scald injury, a male who had collapsed and motorcyclist hit by car.

She replaced an old Bolkow, which means that the advanced Critical Care service that operates in this region is now being carried out in a helicopter that is compatible with the high standard of medical care and interventions that the team provide.

The EC135 has a number of major advantages over the Bolkow.

She is sideloading, which has reduced the amount of time it takes to load patients. With the Bolkow patients were loaded through the back, a process that took up to 20 minutes.

The EC135 has an extra seat, which allows the crew to carry a parent with a child when they are likely to be very distressed. The charity can also use it to train new paramedics and doctors.

Finally, it gives the ability to land on the elevated helipads of the BRI and Gloucester Royal Hospitals, something that wasn’t possible with the Bolkow.

Someone who knows all too well how important this is, is the family of one-year-old Taran Williams from Wiltshire.

Taran was hit by a car in August, suffering a fractured skull and shoulder and severe grazing to his face.

HM65 was with him in 15 minutes, bringing a highly skilled critical care team to his aid.

Thanks to the abilities of the new helicopter, the crew were able to fly him straight to the Bristol Children’s Hospital, landing on the helipad at the BRI.

They also took his grandmother, who was able to provide reassurance for Taran.

The speedy response and transfer made a big difference to the outcome in this case, with Taran spending just three days in hospital.

He has since gone on to make a full recovery, and visited the base with his family to thank critical care paramedic Christian Wiggin for helping him.

His mother Jo said: “The treatment Taran received at the scene made the hospital teams job much easier and they were able to treat his other injuries and get us to the high dependency unit quickly.

“After amazing care from everybody involved we were able to bring Taran home after 3 days much to our relief!”

It has been a big year for GWAAC, with the addition of blood on the helicopter and rapid response vehicles.

Since August the crew have been able to give pre-hospital blood transfusions, which has benefited seriously ill and injured patients in need of emergency blood.

The transfusions are used on people who suffer life-threatening bleeding caused by trauma and some acute medical conditions.

Just days after launch of this project, the helicopter was called to a seriously injured biker in Gloucestershire who was given a blood transfusion at the side of the road.

GWWAC lead doctor Matt Thomas said: “Blood is a precious life saving resource, by putting it on the air ambulance we are getting it to the right people at the right time.

“By having blood on the air ambulance we now have the ability to better stabilise patients with life-threatening bleeding and get them to hospital whereas before this may not have been the case.”