A Bath cancer survivor has congratulated people across the city and further afield for donating £1 million of their loose change to Cancer Research UK at Coinstar machines. 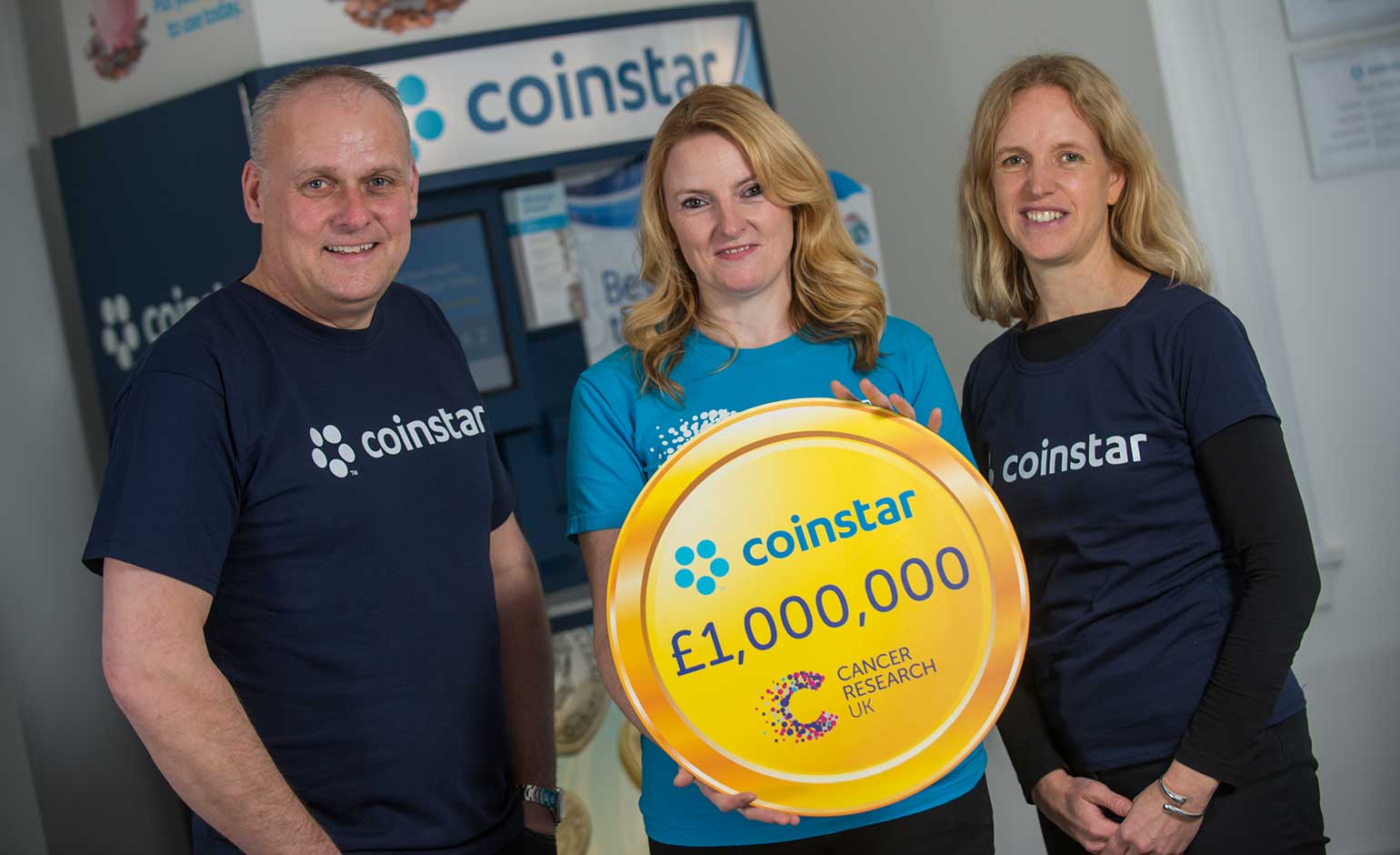 Over a 19-year fundraising partnership between Bath-based Coinstar and the national charity, donations, which passed the million mark this month, have helped fund research to beat cancer sooner and ensure more men, women and children survive.

Receiving the landmark gift on behalf of Cancer Research UK was Tina Angell, from Bath, who has helped raise thousands of pounds for the cause since being diagnosed with bowel cancer in 2003.

Coinstar, which has its HQ in Old Bond Street and is a world-leader in self-service coin counting, operates a network of nearly 2,000 machines located in supermarkets across the UK.

Customers can take unsorted change to the machine where it is counted and converted into a voucher that can be exchanged for cash or used towards shopping.

Thanks to Coinstar’s ‘Coins that Count Programme’, users can choose to donate their coins directly to charity, resulting in the £1 million raised for Cancer Research UK.

Tina was just 24 years old when she was told she had bowel cancer. She had experienced 18 months of being unwell following the birth of her son, Jake, before being diagnosed.

Now 41, she recalled: “I remember the consultant’s exact words: ‘We’ve had the results back and I’m so very sorry to say its cancer’. I was only 24 with a toddler to look after. I was scared that cancer was about to take everything away from me.”

Tina underwent surgery and five months of chemotherapy. Today, she is clear of cancer.

She added: “I am very grateful for research that enabled me to have treatment that saved my life and allowed me to see my son Jake, who is now 19, grow up.

“Cancer Research UK’s work is at the heart of progress that continues to be made, helping more families, like mine, have a future together.”

Following her cancer experience, Tina, who works in Bath in the hospital’s radiology department, wanted to give something back and became a dedicated fundraiser and ambassador for Cancer Research UK.

She explained: “Over the years I have taken part in many charity collections and know how much time and effort goes into sorting and counting all the change that the public generously put into our collection tins.

“For fundraisers, being able to simply take loose change from home, or from a charity collection directly to a Coinstar machine, makes raising money so easy.

“All you have to do is pour coins into the machine and select Cancer Research UK as the recipient on the screen.

“It has been an honour to receive the £1 million pounds on behalf of Cancer Research UK and also to say thank you to Coinstar from all those people, like me, who are still here to enjoy life to the full thanks to research. Here’s to the next million!”

Paul Ogle, Coinstar Country Manager, said: “Coinstar is proud to support Cancer Research UK in its vision to bring forward the day when all cancers are cured.

“Through this collaboration, we aim to make it easy and convenient for customers to donate to Cancer Research UK and we encourage people the region to donate their spare change at a Coinstar machine near to them.”

Sarah Chappell, Client Relationship Manager at Coinstar, said: “We want to thank all those people who have already used Coinstar to so generously donate their change to Cancer Research UK.

“Tina’s story reminds us all how important the money raised is to those facing cancer.”

In the UK, one in two people will be diagnosed with cancer at some point in their lifetime. The good news is, thanks to research, more people are surviving than ever before.

Alison Birkett, Cancer Research UK’s spokesperson for Bath, added: “We would like to pass on our sincere thanks to Coinstar. Reaching the £1 million milestone this month demonstrates that when added together, every penny really does count.

“Cancer survival has doubled in the last 40 years in the UK and Cancer Research UK’s work has been at the heart of that progress.

“But there is still so much more work to do, that’s why we need to raise even more money to help accelerate that progress and save even more lives.”