A 32-year-old woman has been reunited with the South Western Ambulance Service crew who managed to save her life when her heart stopped beating. 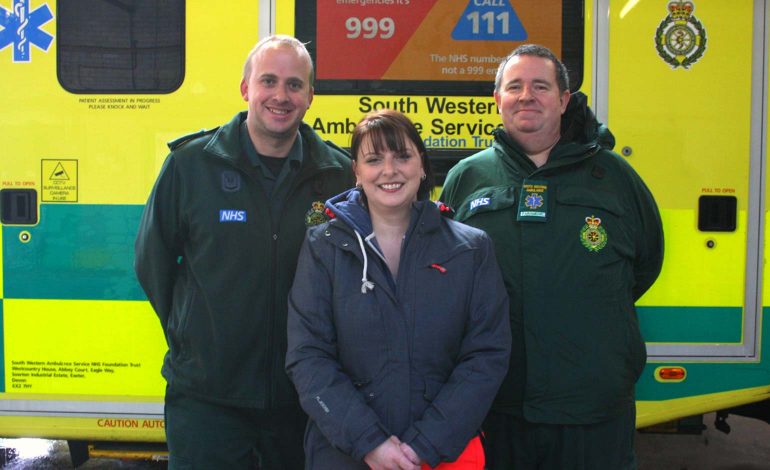 Jodie Prudames, 32, had rapid chest pains and began to sweat profusely at her home in Midsomer Norton last October.

She then went into cardiac arrest, lost consciousness and stopped breathing.

SWASFT Paramedic Ed Bowyer resuscitated Jodie, with the help of her partner Janson. She survived and has gone on to make a full recovery.

Jodie went to Shepton Mallet ambulance station on Thursday 7th March to thank Ed and other SWASFT staff for saving her.

Jodie said: “I thought I was going to die. I had an awful feeling in my chest like a burning heat. I’ve never felt anything like it before. But Ed arrived really quickly, and thanks to him and the other crew I made it through.”

Jodie is now encouraging other people to step in and take action if they think somebody may be having a cardiac arrest or heart attack.

She has welcomed government plans to teach CPR and First Aid to schoolchildren from next year.

It is hoped the long-awaited move will boost survival rates from out-of-hospital cardiac arrests, potentially saving thousands of lives.

Jodie said: “At first I struggled with what had happened to me, because there was no logical explanation. But since then I’ve realised how fortunate I was to survive.

“It’s changed my outlook on life. I had a lot of mental health problems beforehand, but afterwards it felt like a weight had been lifted off my shoulders.

“It’s brilliant that CPR will be taught in schools, and it has 100% of my support. I’m making sure my young daughter is medically aware, and I’d really recommend anyone to learn what to do in an emergency so they can help people.”

In the months before her emergency, Jodie said she had infrequent chest pains, but never thought she had a heart problem.

On the day of the incident Jodie’s mum Andria called 999 after her daughter had been in pain for around 30 minutes.

Staff in the SWASFT Control Hub assessed Jodie’s condition over the phone, and organised for crews to respond.

Paramedic Ed Bowyer arrived within five minutes to give her routine treatment. But then Jodie’s heart stopped beating, and she needed urgent help to stay alive.

Ed led the effort to resuscitate Jodie with the help of Janson. They pulled her onto floor, and laid her flat on her back.

By doing CPR and shocking her with a defibrillator, they managed to get her heart beating again.

Jodie was driven in an ambulance to hospital where she was given heart surgery. It was later confirmed that Jodie’s cardiac arrest was caused by a heart attack.

Paramedic Ed Bowyer said: “This incident highlights that a cardiac arrest can happen to anyone, of any age, and at any time.

“Jodie is not the stereotypical person to suffer a heart attack. Many are elderly or suffer with known heart problems, whereas Jodie is young and normally well.

“Many factors contributed to the fantastic recovery of Jodie. Because she had a cardiac arrest in front of me meant she was given the best possible chance of survival from the very start, including early defibrillation and CPR.

“Jodie is living proof that people can and do survive.”

More volunteers being sought to help out at RUH's Emergency Department