Generous donations from Bath students and local residents have raised around £554,000 for the British Heart Foundation since the initiative was launched in 2012. 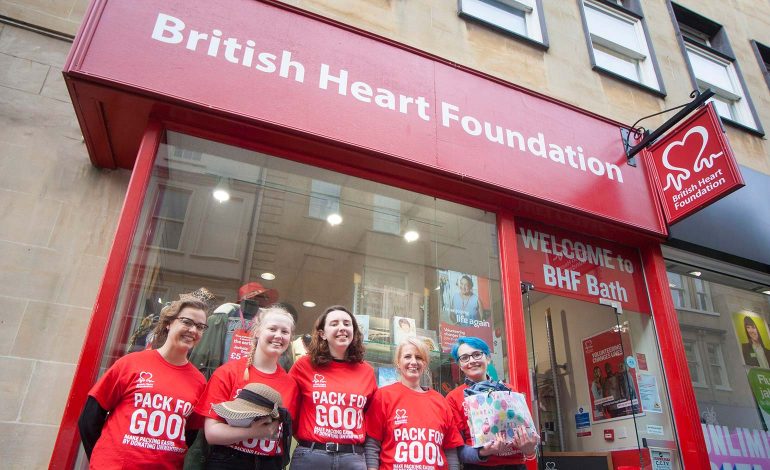 Up to £554,120 has been generated for the British Heart Foundation (BHF) through its ‘Pack for Good’ campaign, which encourages students to donate any quality unwanted items to the charity as they clear out their accommodation at the end of term.

The BHF initiative, led by the Student Community Partnership (SCP) – a joint venture between the University of Bath, Bath Spa University and Bath & North East Somerset Council (BANES) – was launched in 2012 to raise funds for the charity’s vital work and help cut down on waste.

Each bag is typically worth around £14 and items donated range from books, to clothes and DVDs, which the charity turns into money for research into heart and circulatory diseases.

In the last 12 months, the BHF says the campaign has directly funded a broad range of projects and resources within B&NES, including 17 health at work schemes; six healthcare professionals; 15 CPR award schemes; and eight defibrillators in the area.

In addition to helping support the work of BHF at a local level, the campaign has also diverted 77.83 tonnes of items from the waste stream.

This means that 718.272 kgs of CO2 emissions (greenhouse gases) were saved from entering the environment, helping to reduce Bath’s carbon footprint.

“I’m also thrilled that Bath Spa students contributed 0.606 tonnes of food to Fair Frome food bank from the move out as well.”

Professor Peter Lambert, Pro-Vice-Chancellor (Learning & Teaching) at the University of Bath, said: “We’re delighted to reach the landmark figure of well over half a million pounds raised by students and local residents in support of BHF.

“Since the campaign’s launch in 2012, we’ve seen community support for the initiative continue to grow. The collective generosity of students and local residents, along with the collaborative effort of the SCP, directly support the worthy work of BHF.

“At the same time, Pack for Good is having a positive impact on the environment.”

Amanda Purkiss, University Account Manager at the BHF who manages the partnership, added: “We want to say a huge thank you to the students and local residents of Bath for their support.

“We really value these donations enormously, as they deliver much-needed stock for our shops. We’ve also been able to divert unwanted items from going into landfill.

“Without these items, we could not have raised vital funds for life-saving research and help beat the heartbreak caused by heart and circulatory diseases for families in Bath.”

Currently, around 720,000 people live with heart and circulatory disease in the South West, and each year the conditions are responsible for around 410 deaths in the Bath area.