Pantomime audiences at the Theatre Royal in Bath have raised more than £5,500 to be split between four local organisations, thanks to collections made over the annual Charities Week. 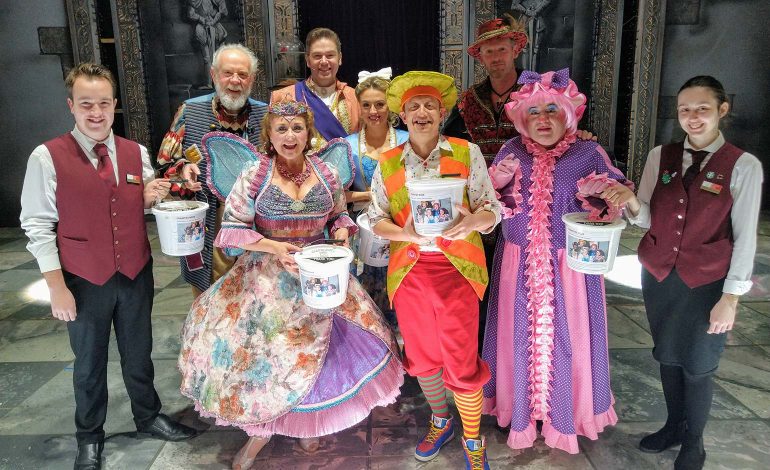 Collections were made over seven days during Christmas week, between Sunday 22nd December to Sunday 29th December, by the Theatre’s Front of House staff and volunteers after matinee and evening performances of Beauty & The Beast.

During Charities Week, Wendi Peters, who plays Fairy Bon Bon in Beauty & The Beast, made announcements from the stage on behalf of all four charities at the end of each pantomime performance when bucket collections were held.

The actress, well known on TV for her roles in Coronation Street and Hetty Feather, said: “We are bowled over by the generosity of pantomime audiences who wholeheartedly embraced the fundraising bucket collections during Charities Week here at the Theatre Royal Bath.

“Between them they have raised a truly impressive total which will really benefit four wonderful charities in the year ahead.

“We applaud everyone who made a contribution and thank them for their kindness on behalf of Sense, Acting for Others, St John Ambulance and Canine Partners, who will be able to use this money to continue their important work in 2020.”

Wendi was joined on stage by Jon Monie who plays Louis La Plonk, Nick Wilton who plays Polly La Plonk, Ben Harlow who plays Hugo Pompidou, Shaun Dalton who appears as Prince Albert and the Beast, Clare Maynard who plays Belle, Marcus Knibbs who plays Clement and George Miles and Gabby Finnegan from the Theatre Royal’s Front of House Team to celebrate the donations given by theatregoers.

The money raised during Charities Week, which already exceeds £5,500, continues to be counted and the total sum donated by Bath’s panto audiences will be divided equally between the charities: Sense, Canine Partners, Acting For Others and St. John Ambulance.

Sense provides personalised support for everyone who is deafblind and living with complex disabilities to take part in life.

Canine Partners transforms the lives of people with physical disabilities by partnering them with assistance dogs, bringing a greater independence and quality of life to their partners; offering security, companionship, and practical help with everyday household tasks, as well as psychological and social benefits including increased confidence and self-esteem.

Acting for Others supports people who have worked in the theatre industry who are ill, injured or elderly and can no longer work or find themselves in need.

St. John Ambulance is the nation’s leading first aid charity; its volunteers offer their skills and time in the heart of their community and at public events, including performances at Bath’s Theatre Royal throughout the year.