Bath & North East Somerset Council is supporting a new exhibition which is capturing the thoughts of young people on issues such as mental health, homelessness, knife crime, drugs and alcohol. 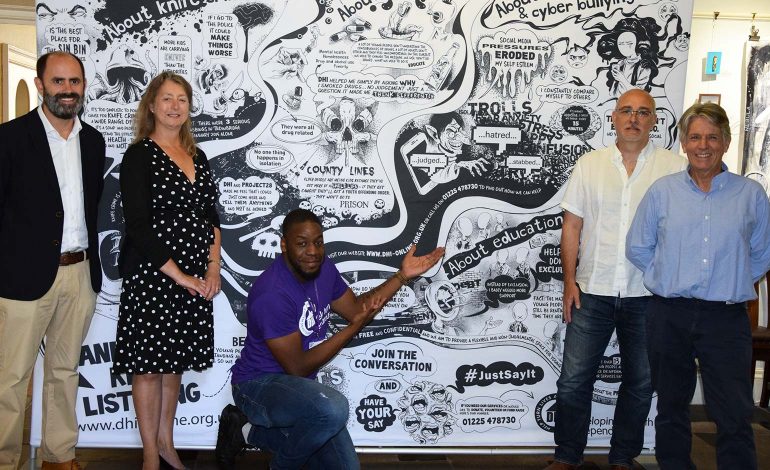 The exhibition has been put together by DHI (Developing Health & Independence). The charity runs a range of innovative services across the region, to help disadvantaged people and those living on the margins of society turn their lives around.

Designed by David Rolls of White Star Design and funded by members of the Bath Business Club, the display is an illustrated record of what teenagers said at ‘Just Say It!’, an event hosted by DHI in March this year.

‘Just Say It!’ offered young people an opportunity to share their views on the big questions facing their generation such as the impact of social media on mental health, the housing crisis, drug legalisation, and knife crime.

Comments received are helping DHI to develop its services to support young people in an effort to end social exclusion.

Councillor Romero, said: “DHI have been working in Bath for the past two decades helping people to help themselves turn their lives around, stand on their own two feet and reduce dependency.

“But if we are to help young people it’s imperative to listen to their words, thoughts and concerns and adapt and transform services so they are fit for the future.”

James Hooton, DHI Director added: “The challenges that young people face today are vastly different to anything that previous generations have faced, and that’s why it’s so important that we listen carefully to their voices.

“At DHI’s Project 28 and Motiv8 young people’s drug and alcohol services, we are seeing more people than ever, with more complex needs than ever.

“Substance misuse, housing issues, mental ill health and offending do not sit in silos, but are – as one young person said at Just Say It – all part of a ‘soup’. As such, we all need to make sure we are tackling them holistically.”

The exhibition will be on display in Bath’s One Stop Shop in Lewis House in Manvers Street until 5th September, when it will move to Keynsham’s One Stop Shop and Library.