A young activist was arrested on Saturday 1st May after stopping traffic in the city centre for nearly an hour as part of a protest against Government “inaction” on the climate emergency. 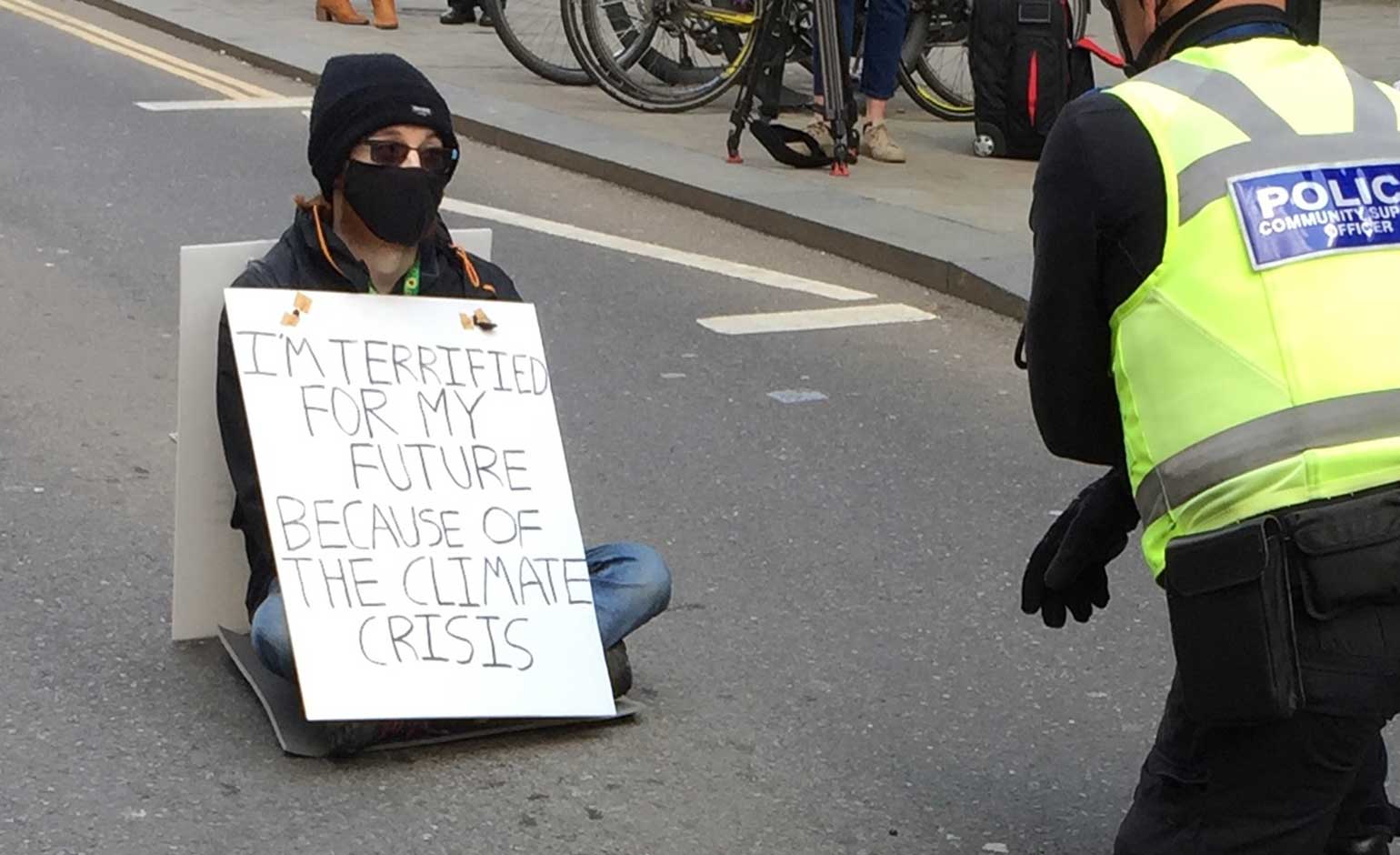 CJ, as they prefer to be known, sat on the High Street in the centre of Bath, wearing a sign that read ‘I’m terrified for the future because of the climate crisis’.

The action comes two years on from Parliament’s declaration of an environmental and climate emergency.

The young student was not alone, as simultaneously across the UK, hundreds of people took part in their own towns and cities, raising awareness of the climate emergency.

19-year-old CJ, who is studying for a geography degree, said: “Firstly I would like to apologise to the residents of Bath for the disruption caused by this action.

“I’m doing this as an act of desperation. As a young person my life will be irreversibly changed by the climate and ecological emergency and the UK government isn’t acting quickly enough to avoid disaster. Young people’s voices are often ignored when it comes to issues on the climate.

“I have tried all the legal methods including writing to my MP, signing petitions and even going on strike, and all the time carbon emissions have been rising. I now see no other option except to risk my life and civil liberties by blocking roads. I would ask the government “will you act now?”.

“I have a younger sister and I am terrified for the world in which she will be forced to grow up. The climate emergency is the biggest threat that our generation will ever face. We were born into a world already destined for climate chaos.

“We are the first generation to experience the effects of the climate crisis and the last who can do anything about it. As someone living in the UK I feel it is my duty to act now as the climate and ecological crisis is already being experienced by those in the global south.

“It is the wealthy countries that have contributed the most in carbon emissions yet the poorer countries who are experiencing it first. I cannot be a bystander and let this injustice continue.”

CJ’s action created substantial congestion in the centre of the city with traffic backing up and a crowd of shoppers and pedestrians gathering outside the Guildhall.

He was arrested for obstruction of the public highway and taken to Keynsham police station.

The action, known as Rebellion of One, was part of an approach created by Extinction Rebellion during the Covid-19 pandemic, which allows people to “engage in civil disobedience alone, yet united”.

An Extinction Rebellion spokesperson said: “Two years ago today the UK Parliament declared an environment and climate emergency. And yet in February this year the Chief Executive of the Environment Agency Sir James Bevan said that the UK is hitting worst case environmental scenarios that if left unchecked would collapse ecosystems, slash crop yields, take out the infrastructure on which our civilisation depends, and destroy the basis of the modern economy and modern society.

“The Committee on Climate Change and the National Audit Office who are tasked with monitoring the Government are warning the public that their climate plans are failing to materialise.

“Our leaders are still not taking this seriously. It’s time for ordinary people to step up and demand action. That is why this act of rebellion is now taking place in countries across the globe.”