An area of unspoilt farmland which Bath residents believe saved the city from flooding during Storm Dennis could be protected for generations to come. 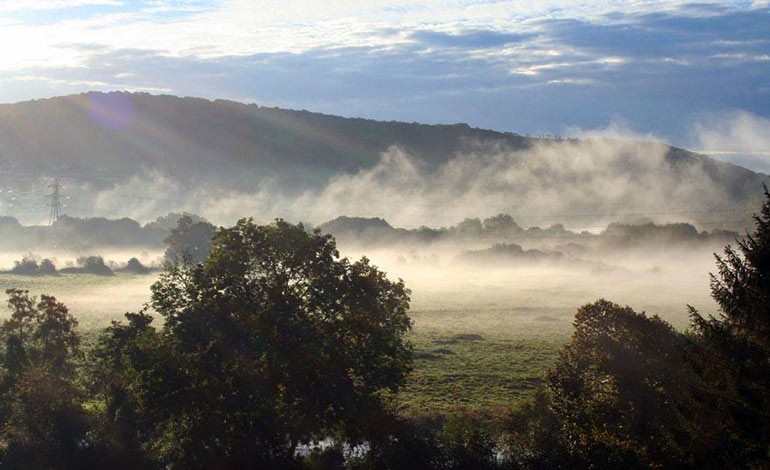 Plans to spend millions of pounds transforming Bathampton Meadows into a park and ride site serving the east of Bath were shelved in 2017, after fierce opposition from the public.

Now Bath and North East Somerset Council is in talks with the National Trust about an asset transfer to protect the land in future, with an unusual deal which may not require the council to fund its maintenance.

Scores of photos have been posted to social media in the last few days of the land covered in water.

One local, David Higgs, said on Twitter the meadows had become ‘Bathampton lake’.

While others spoke of the land absorbing the huge amounts of rainfall, preventing the centre of Bath facing a ‘deluge’.

The future of the meadows would have looked very different if massive public opposition failed to convince the council to drop its plan for a new park and ride.

Thank goodness that Bathampton meadows were not paved over to build a park & ride – otherwise all that water would be flowing into Bath #commonsenseprevails #StormDennis pic.twitter.com/LrOnoP7h5m

Councillor Kevin Guy said the community had been “vindicated” after the meadows prevented a “complete mess” in Bath after the recent storms.

The council only owns some of the land but he revealed that another landowner, his father-in-law, is also negotiating with the National Trust, meaning more of the meadows could be protected.

Mr Guy told the Bathavon North Forum meeting on Monday 17th February: “This is a new policy for the National Trust. Traditionally they’ve taken on old houses – they want to diversify their portfolio.

“The National Trust are extremely interested and the administration want to give it to them.

“We promised we would give it to the National Trust. It’s just a case of the officers doing the paperwork.”

“They want you to decide what happens to the land. They want to ensure it is accessible for people.

“Sarah Warren and I want to create cycling routes to town to create a people’s highway, but it’s not being imposed in any way.

“My father-in-law-owns a stretch of the land. The National Trust are in negotiations with him. I’m persuading him gently.”

Asked if there were plans to improve the drainage of the meadow, Mr Guy said: “The community have been vindicated by not allowing a park and ride here.

Bathampton Mill car park flooded on both sides. Meadows have absorbed all they can. pic.twitter.com/Cfvq0B45h2

“The meadow has been doing its job soaking up a lot of water that would’ve been in the city centre or flooded the other side of Bath.”

Millions of pounds were spent on plans for a park and ride to serve the east of Bath before public opposition forced the previous Conservative administration into a U-turn in July 2017.

More than 6,000 people signed a petition to stop the development.

Campaign group the Bathampton Meadows Alliance asked all the parties what they would put the meadows “put beyond the reach of inappropriate development in perpetuity”.

The Liberal Democrats who now have control of the council said they would transfer it to the National Trust.

The 125-year-old charity has the unique statutory power to declare land “inalienable” – meaning it cannot be voluntarily sold, mortgaged or compulsorily purchased against the charity’s wishes without special parliamentary procedure.

Environment and design manager Mark Minkley told the forum: “I would be very surprised if the National Trust pulled out. This fits with their new vision.

“The business case is about protecting the World Heritage Site and its setting for future generations.

“They recognise there are opportunities to improve the habitat and make it better for people.

“Normally, if you were giving them land you’d have to pay for its maintenance. We’re transferring it without a budget.

“They are very keen to take it on because they see its strategic importance.

“We’re hoping by the spring or summer we’ll get to a decision. The National Trust are committed to having a series of workshops with the community to work out what the priorities are for the land.”

He said the car park on the east of the site is not part of the asset transfer and will continue to be leased to Batheaston Parish Council.