Bath is one of the few cities left where you don’t need a licence to perform, which is why we are so fuelled with acts all over the city. Here in Bath buskers are allowed to Busk freely for an hour and then they have to move on to another spot. 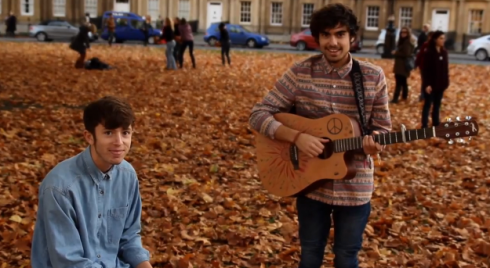 Some may moan about the performances that create crowds but I think it is something to applaud, surely you should just smile and if you don’t enjoy it just walk on by. Buskers love what they do that is something you can be sure of, they aren’t going to stand out in the cold and perform for you unless they are passionate about it, what would be the point, and the money sure isn’t a reason. The perfect examples of buskers are Keir and Kyle, two brothers from Corsham who have busked for about a year. Keir is seventeen and Kyle is fifteen but if you were to look at them you would think they were a lot older. The two explained how their busking efforts support them and keep them from getting a generic part time job whilst still studying; instead they are able to do something they love.

Kyle received his first drum kit at the age of eight and Keir his first guitar and the age of seven. Keir has a very unique way of playing and breaks at least three strings in a busking session. He is very loud and proud with his acoustic guitar, boldly strumming away grabbing everyone’s attention, with the loud acoustic tune.

The two talk of their parents fondly and how they have influenced their music taste in some strange ways, the two were never interested in nursery rhymes and were brought up on the likes of Abba and the Eurhythmics.

The boys now have developed their own music tastes, from their initial inspiration, Gabrielle Aplin who was one of the first YouTube phenomenon’s inspiring them to make their own videos. The two have videos of covers and of their own songs. Keir’s greatest love is Laura Marling, who stimulates much of his writing, drawing upon life events, what surrounds them and the things they desire. As they talk of their tastes in music they explain how much their mother supports them. How she has helped developed their music tastes over the years with the likes of Busted, Foo Fighters, Bombay Bicycle Club and Bring Me The Horizon. The two mention Justin Beiber and say how although they don’t like his music they applaud his success, Beiber is hard to ignore for musicians of similar age, as although he plays generic Pop his sheer success is something to aspire too. 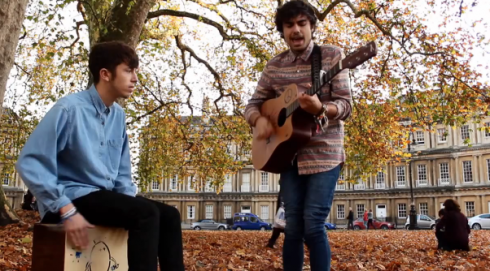 The boys’ favourite cover is Paulo Nutini’s – New Shoes and they say how although they don’t have a set list every time they busk each set will begin with this song. Although the two are young musicians they are already writing there own music, their single Tumble is inspired by our beautiful and historic city Bath.  It starts slowly and develops into a faster beat perfect for Keir’s husky, striking voice, in the video the duo use The Circus in Autumn as a backdrop. The pair fit into the city brilliantly, eccentric and eclectic creating the backing track to life in Bath, who wouldn’t be inspired here?

Keir has a very loud and distinctive voice that takes over the street grabbing everyone’s attention, he describes his voice as ‘violent’ others would say more potent. Kyle creates the perfect base for his brother’s voice with anything from a Pringle tube to a wooden box complementing each other perfectly. The two create the perfect combination of unique sound that is almost a completely new genre in itself. Keir sings loudly whilst playing the guitar (bare foot may I add) they remind me of a young Bob Dylan but with a louder voice, Indie and fresh, they have avoided the generic top 40 and ballads buskers usually fall back on. I can hear whispers among the crowds of how interesting they are to listen too. They are distinctive and proud of what they do the two are level headed and determined to succeed. They create an enjoyment for the whole city. Keir and Kyle are two extremely polite, hilariously funny and powerfully driven young boys who aren’t afraid to take on the world with their music, and who can blame them, they’re brilliant. So next time you walk on by a busker maybe chuck a quid in, or just even enjoy what they are doing, we don’t want to lose this wonderful highlight from our city, we are lucky to have such aspiring people that create culture for absolutely free.

Our thanks to Ashleigh Camp for writing this feature.