“After Me Comes the Flood (But in French) drip splosh splash drip BLUBBP BLUBBP…” is the title of the show. It gives some indication of what sort of anarchic chaos might ensue, and it does. 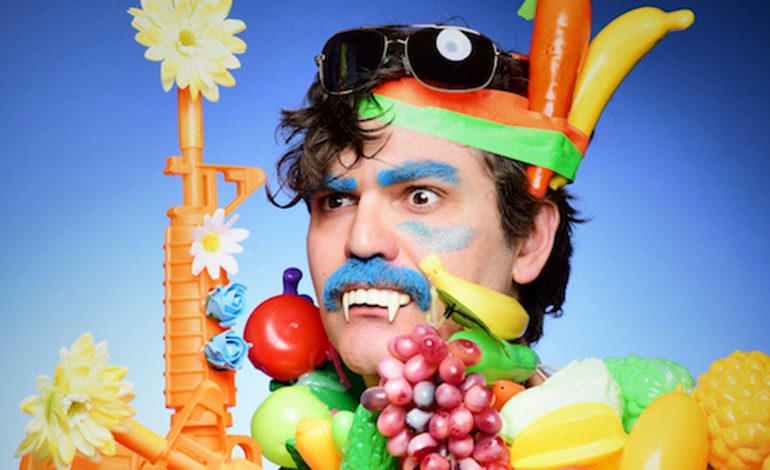 Well, no. Apparent anarchic chaos ensues. In fact, this is a highly-structured piece of what you might call Dadaist comedy.

If indeed there is any genre that John-Luke Roberts belongs to. He is very much a one-off.

In a rollicking show in which he changes character and talks to himself in different voices several times a minute; where he tells you the punchlines of jokes before the jokes, indeed has a screen display of said punchlines as a backdrop to the stage; where he has, for instance, a love-hate relationship – no really a physical one, kisses tongues and all – with the Nietzschian abyss; well, you have to work hard to keep up.

But that work is worth it (Though it proves too much effort for two of tonight’s audience and they leave, noisily; about which Roberts seamlessly inserts much extra left-field improv, without malice toward the retirees).

For the rest, his mind-bending breadth of comic imagination and his relentless non-stop energy leaves an audience gasping for breath with laughter.

This is a unique trip to the farthest fringes of what comedy can do, and an exhilarating ride for those who are up for it.

After Me Comes the Flood (But in French) drip splosh splash drip BLUBBP BLUBBP… was performed by John-Luke Roberts at the Rondo Theatre, Bath on Saturday 25th January 2020.