First up a confession; I’ve never been to a modern burlesque show before; I’d never been able to understand the concept of ‘ironic’ stripping. 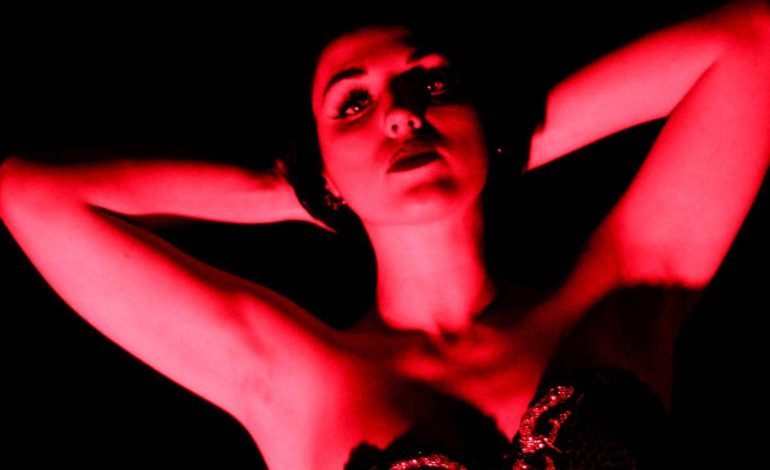 So, on your behalf, and putting my pre-conceptions to one side, I went with an open mind to see what it was really like.

This evening is hosted by Josh Bojangles, a large man (not really – a woman with a painted on moustache) in a tight suit, who does the standard compere stuff of constantly encouraging us to cheer and clap and “make more noise” at every opportunity.

There are a number of acts, which with a couple of exceptions, follow the same format: bump and grind in a ‘sexy’ way, remove whatever costume each act wears, down to bra and pants; face away from audience, waggle bum, remove bra, turn back and wobble breasts with nipple tassels at audience. Exit.

At one point a team of four do the same, in formation. The couple of exceptions are an interesting act by a woman with a dog dummy, feigning both of them getting off their faces in a nightclub – a great piece of old-style slapstick comedy, and no clothes were shed ; and a nice quirky stand-up routine from a lanky bisexual (we know she is because she tells us so) who has some wry comments on all sorts of things, not just sexuality.

In between, Mr Bojangles is resolutely cheery and potty-mouthed, emphasising how naughty all this is, and picking on members of the audience in various ways relating to sex (to which, to be fair, the audience respond enthusiastically), and the eponymous Cici Noir finally appears as the last act of the show.

It is billed as ‘strictly grown-up entertainment’, and even the word ‘feminism’ appears at times, but really this is adolescent entertainment. Not that there’s anything wrong with adolescents.

Cici Noir’s Spring Fling Burlesque, presented by Cici Noir in association with Flipside Productions, was at the Rondo Theatre in Bath on Saturday 23rd February 2019.