The reason for the title of this event begins outdoors in Widcombe Parade for the “switching on” of the festive illuminations. 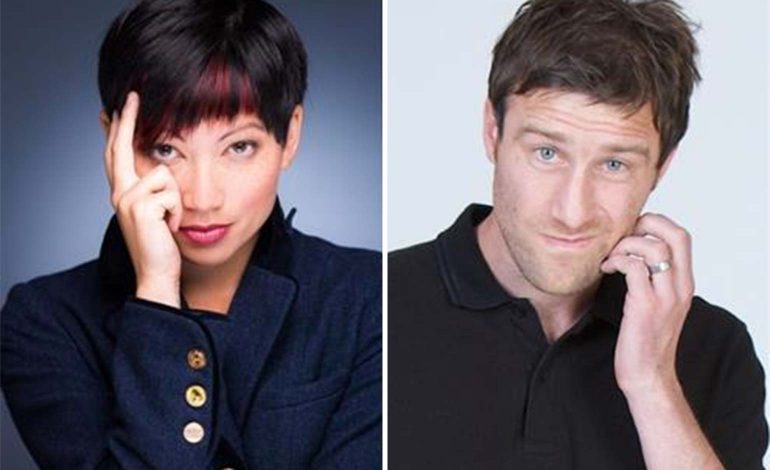 In inverted commas, because they’re on already, but we get put through some paces by Ginny Adams of Mojo Moves comedy exercise club, and then a bit of a walkabout with Lady Margaret Oswick’s little-known Australian sister, absolutely not to be confused with Dame Edna; but pretty much just as funny a drag act, from Pavel Douglas.

Inside the Social Club, the evening’s entertainment begins with Nick Cudworth’s boogie piano as the audience assembles, and jolly toe-tapping too.

The first act on stage is comedian Andrew Bird, a man who has been the support act to Michael McIntyre, among many other comedy luminaries.

His own act could be called family entertainment; though not in the sense that it is bland, just that it is mostly about families and their infuriating qualities.

It isn’t what you’d call middle of the road, and indeed frequently comes close to running the red lights, in a rumbustious set that has the audience hooting in recognition.

After the interval, Billy Kidd’s magic act is a bit of a car smash, though through no fault of her own. She’s just back from tour, and the airline has lost her luggage with all the props for her act in it.

She gamely gives it a go, without even so much as a pack of cards, and sort of gets through three tricks, further stymied by the sound system playing merry hell with her headset mike, with loud crackles, pops and bangs. Can’t have been her most enjoyable set ever; but full marks for trying.

The ever-resourceful Widcombe Radio Players tonight essay political satire, with their naughty take on Wind In The Willows, that has a recognisable Boris Johnson as Toad, and a sycophantic butler with the name Rees-Mogg.

Though this time they don’t play so much on the amateurishness of the players, and there’s none of the hilariously ham-fisted ‘sound effects’ they often use; but they are still a class act.

He opens outrageously with an accordion- accompanied scabrous ditty about killing his dog for Satan (You had to be there.), before crashing into many of his wildly funny takes on his blindness, which he never uses to get the sympathy vote, just to get great left-field laughs.

The set culminates triumphantly in the best and naughtiest George Formby spoof song ever.