Are you a mum or dad stuck all day looking after a squealing new baby? Do you feel shut out from going to any gig in a theatre because of it? Yes? Then this is for you. 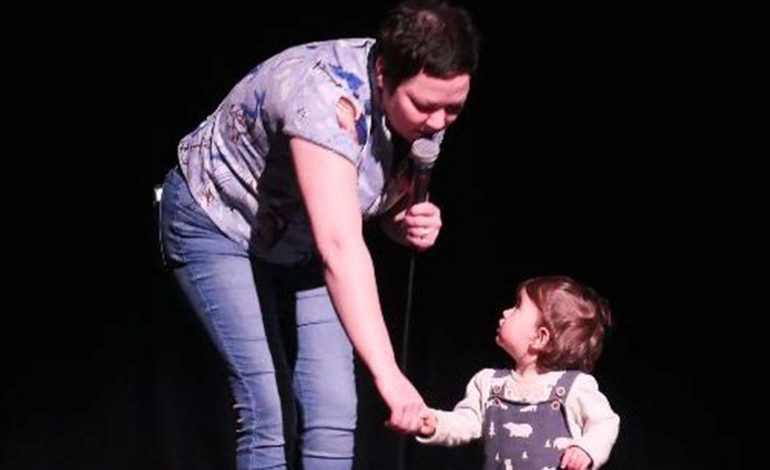 You can feel uniquely privileged, because this gig, set up by actor and comedian Angie Belcher (and a fairly new mum herself), is at noon, when everyone else is at work and can’t come. Ha ha ha!

So at the Rondo today, the place is full of nappies and bottles and prams and baby noises.

And guess what, it doesn’t matter. This is a gig for the adults, not kids’ entertainment for babies. And it isn’t all about motherhood, though Angie’s introduction to the event has some graphic and very funny tales of her own experiences of childbirth, sex and gynaecology.

The format is that she will introduce two comedians before an interval, and another after; and the audience can at any time breastfeed, go in and out to the toilet, bounce their offspring up and down; whatever else they need to do. And the babies can make whatever noises they want.

The comedians have a microphone; it doesn’t matter. Nor does it matter how ripe the material is: the babies won’t understand.

First up is John Matthews, a lanky and extravagantly bearded science teacher taking time out from his (other) day job to do some nicely silly sexist and racist jokes – that’s jokes about sexists and racists, before you write to the Guardian – among other stuff.

Andrew White is a nineteen-year-old gay man who neither looks nineteen, nor looks gay (“Gays look fashionable”, he was told) but is an accomplished comic with lots of dry wit about his appearance and the trouble with not looking gay.

After the interval, George Rigden entertains with lots of amiable audience banter (with the adults, not the babies, obvs) mostly about his own unattractiveness and failures in sexual relationships, including mention of the small size of his genitals; which is unlikely to improve his chances, really. As is the question “Are there any single women in?” But I think he knows that.