A glove worn by Queen Elizabeth I and a pair of gloves worn in the Star Wars films are to go on show as part of a new display, Glove Stories, at the Fashion Museum in Bath. 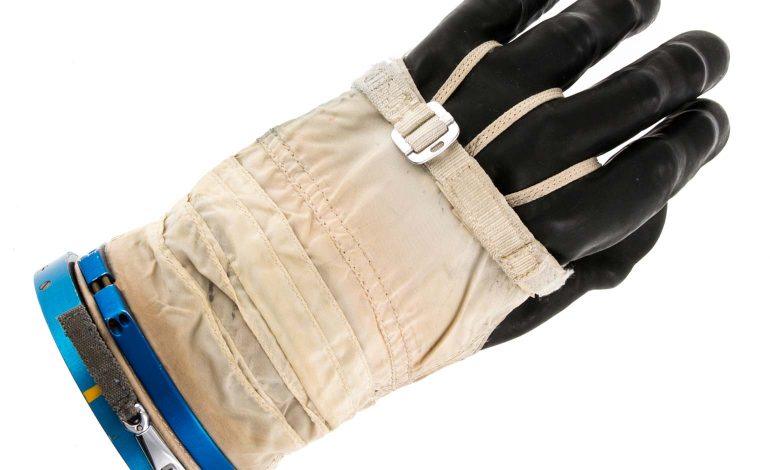 Soviet Cosmonaut space suit glove, about 1986 | Courtesy of the Worshipful Company of Glovers of London

The display, featuring one of the best collections of gloves in the world, will showcase examples of historical gloves from the past 400 years, many of which have never been on show to the public before.

Glove Stories will see 150 pairs and single gloves woven throughout the A History of Fashion in 100 Objects exhibition, showcasing the breadth and depth of The Glove Collection.

Rosemary Harden, Fashion Museum Manager, said: “Glove Stories is a celebration of the long-standing relationship between the Fashion Museum and The Worshipful Company of Glovers of London. The Company has most generously loaned their superb Glove Collection to the Museum since the 1980s.

“The display will feature groups of gloves and will focus on uncovering unique and different stories, while also celebrating the incredible craftsmanship and skills involved in this often overlooked area of fashion along the way.”

Councillor Paul Myers, cabinet member for Economic and Community Regeneration at Bath & North East Somerset Council, which runs the museum, added: “”We look forward to showcasing this amazing collection of gloves at the Fashion Museum, and hope that the display will attract a wide range of visitors, from fashion fans to Star Wars enthusiasts.

“As always, entrance to the Fashion Museum will be free for local Discovery Card holders.”

Glove Stories shines a light on the British glove industry. At one time there were hundreds of glove makers across Britain, centred in the towns and villages of Somerset, Dorset and West Wiltshire.

A key element of the Glove Collection of the Worshipful Company of Glovers of London is the Spence Collection, a grouping of over 100 single gloves and pairs of mainly 17th century gloves, all carefully collected by artist Robert Spence. Spence trained at the Slade School of Art and collected historical gloves to inform his own artwork.

A Quaker and pacifist, he was awarded the Croix de Guerre for his work as an ambulance driver during the Great War. Spence donated his collection of gloves to the Worshipful Company in 1959.

The Worshipful Company of Glovers of London was formed in 1349 by glove makers in London who wished to protect the high standard of their craft and was granted its Royal Charter by King Charles I in 1638. The Livery collection is now cared for and housed at the Fashion Museum.