Boaters and residents near Bath have accused each other of prejudice, threats and intimidation and a trial moorings scheme has been branded a “total failure.” 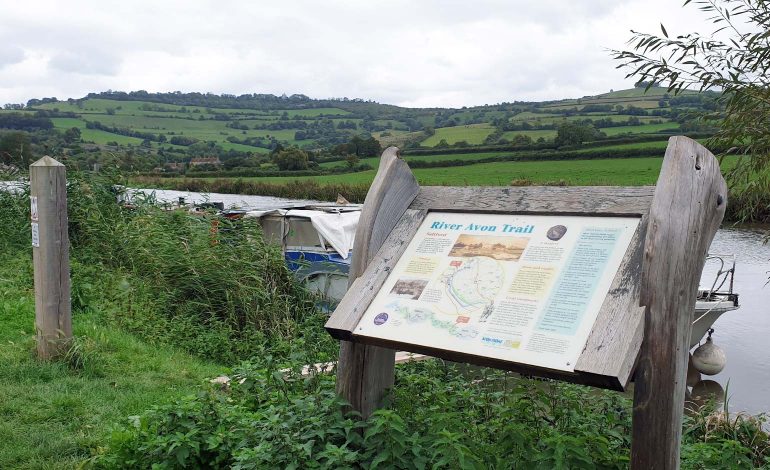 Boaters say they have been called “scum” and fear that prejudice may drive them from moorings in Saltford.

But residents near the moorings at Mead Lane say a trial scheme that gave boaters somewhere to stop for up to two weeks has failed.

It is claimed they have faced years of threats and intimidation from people living on houseboats who are often unidentifiable.

The animosity began in 2017 when Bath and North East Somerset Council began trialling a number of mooring points allowing boaters to stay for up to 48 hours or as long as two weeks, but critics said it was a “free for all”.

After reports of antisocial behaviour against both sides and claims that boaters frequently outstay their welcome, the authority’s new administration is consulting on the future of the site. 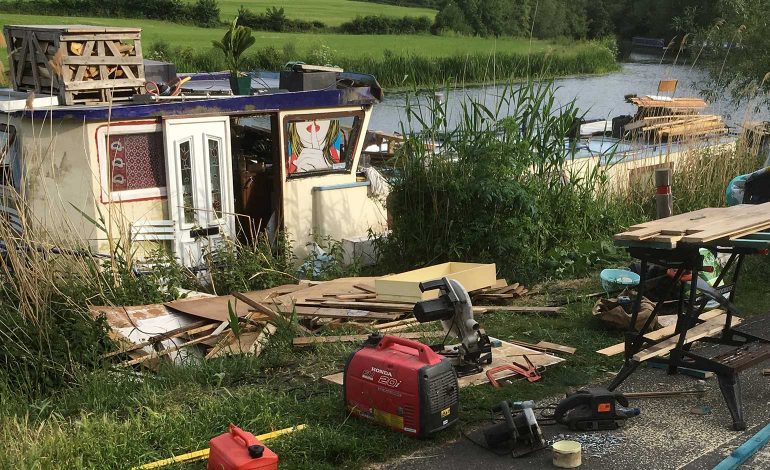 Saltford Parish Council wants Mead Lane to become a nature reserve and is calling for mooring to be banned, but those living on houseboats say the move could leave people facing homelessness.

Pamela Smith from the Kennet and Avon Boating Community said: “Our community know that everything we do in Mead Lane is being closely scrutinised. We’re really careful not to upset anybody.

“Anything slightly wrong is seized on. It stems from prejudice and a sense of entitlement.

“They are doing everything they can to stop boats mooring there. I don’t see why they can’t share it with everyone. They need to have some sort of anti-prejudice education.”

Ms Smith said homeowners deny liveaboard boaters’ right to be on the water – but countered by saying boaters had been allowed to use the waterways since “time immemorial”, long before there were houses in Mead Lane.

A man living in one of those houses, who asked not to be identified for fear his family would be intimidated, said: “About three years ago the council approached us about a mooring trial. Naively, we agreed.

“It’s been absolute chaos. The council had no control. There was no monitoring. It was a free for all.

“The council just threw us to the lions. No one came down. No one did anything. We’ve monitored it and reported it.

“Residents have been intimidated, threatened.

“There has been a catalogue of issues over the last three years.

“The previous administration wanted to solve a problem of where to put live-aboard boaters. They needed somewhere for 14-day moorings.

“We were naive enough to say we’d give it a go. The council has turned a blind eye.

“This summer was horrific. The trial has been a total failure.”

Boater numbers on the waterway have risen since 2015, when the Canal and River Trust changed its terms for liveaboard boaters who do not have a home mooring.

Continuous cruisers are now expected to move on every 14 days, but they can get permission to stay longer in certain circumstances, for example if they are ill or their boat breaks down.

To address the increased need, B&NES Council trialled a number of 48-hour mooring points in Mead Lane and others that allow boaters to stay for up to 14 days.

The homeowner claimed he had submitted Freedom of Information requests that showed the council had not tried to move on a single boater, and when he submitted a 200-name petition highlighting concerns it “disappeared”.

He said some 300 boaters moored in Mead Lane over the summer and two in five had stayed longer than they should have.

“If someone’s here for five weeks, where is their waste going? There aren’t any facilities,” he added. “It’s a terrible thing that’s been done here. We hope the new administration at the council will make a difference.”

The man said there are plenty of other places along the waterway where boats could moor, but Mead Lane has features that are unique on the River Avon.

Boater Laura Darling said the stretch has some of the only safe moorings on the river and their removal would leave many boaters at risk of breaching the terms of their licence – and facing homelessness.

Children are not allowed in Saltford marina so when Ms Darling fell pregnant she started continuously cruising. She said she had her first run-in with a Mead Lane homeowner before her son was even born.

“I think it’s unreasonable to say all boaters should be removed based on a minority,” said Ms Darling.

“You wouldn’t evict a whole street if someone was misbehaving. We should be working together.”

The Mead Lane moorings are quieter now than they were in the warmer months.

Malcolm Pemberton, who has lived on his boat for three years, is only a recent arrival but said the stretch of river was “nicely busy” when he walked past over the summer. 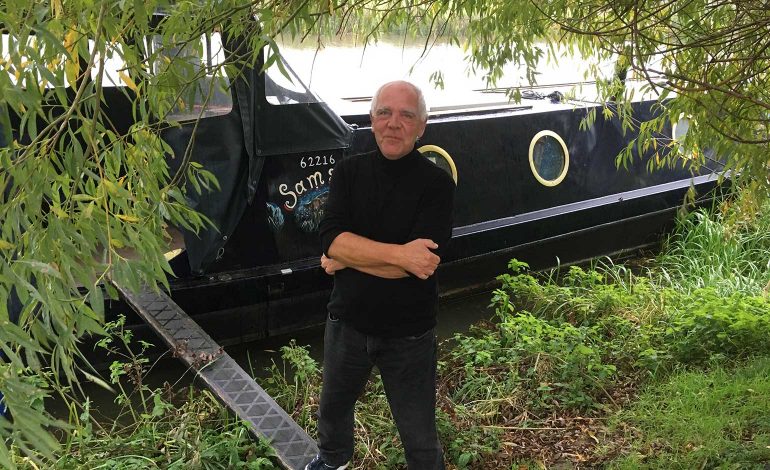 He said: “There are so few decent moorings. That’s what makes this area so popular.

“There are approximately 30,000 people living aboard boats in this country. They all have to live somewhere, and most have to move every 14 days.

“Most of us are quite normal, civilised people. There’s always an exception, but the bad eggs are few and far between.

“What I would like to see here is what residents don’t want – improved facilities including more water points and chemical toilet emptying points.

“I would be content with allowing the present situation to continue.

“Living on a boat has been my dream all my life. I will never live in a house again. I will die on this boat.”

In its response to B&NES Council’s consultation, Saltford Parish Council acknowledged that the issues were caused by a minority of boaters but said the trial had “exacerbated the problems of non-compliance with mooring limits, anti-social behaviour and heavy littering”.

“The trial has clearly demonstrated that Mead Lane, as a hitherto unspoilt beauty spot in the green belt and in close proximity to residential housing, is unsuitable and impracticable for moorings which require continual management,” it said.

“In order to protect the riverbank for the majority of visitors, most of whom would not be aware or in a position to respond to this consultation, and residents who all value this important and iconic location, a mooring ban should be implemented without delay, commencing with an immediate winter mooring ban.”

The parish council endorsed the Saltford Environment Group’s bid for the site to become a local nature reserve to protect features that are unique on the River Avon.

But it said the threats are readily manageable “at no significant inconvenience to legitimate residents and leisure users”, but mooring would be banned.

It said: “Mead Lane could very rapidly become a local nature reserve that provides the additional benefit of easy access for observing and learning about riverside wildlife habitat whilst remaining a local beauty spot and area for leisure.”

Writing online, the Saltford Environment Group said: “This is not about stigmatising boaters, the majority do of course operate and moor their boats within the law, but rescuing Saltford’s riverbank at Mead Lane from abuse by a minority and protecting the wildlife and this iconic location for the benefit of the majority.”

Rebecca Sarll, a boater who teaches sustainable living, said the bid to create a nature reserve was an “underhand tactic” and the attempt to remove moorings was “like social cleansing”.

She said boaters are often “dehumanised” by residents calling them “scum” or “you people”, and she is now nervous of mooring at Mead Lane. 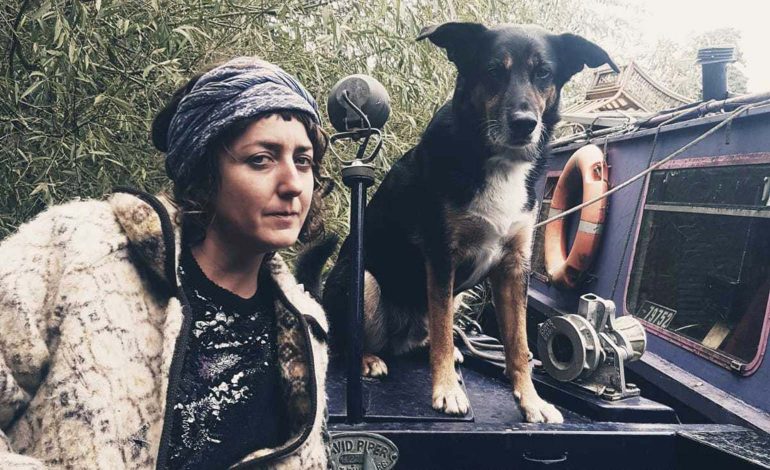 Ms Sarll said she was brought to tears by someone who screamed at her after she overstayed in one of the 48-hour moorings because her mum just died, but the homeowners have no consideration of boaters’ personal circumstances.

Councillor Duncan Hounsell, who represents Saltford on B&NES Council, said the mooring trial began without clear criteria to assess the outcomes, so it is important that everyone can have their say in the consultation.

The consultation, which is independent of the council, will run until 31st October. It asks if the mix of mooring points should change, if there should be fewer moorings or none at all.

Council leader Dine Romero said: “Following issues raised by the community when there were no limitations to moorings on Mead Lane, the council began a trial.

“Shortly after taking office, the council’s new administration commissioned a formal review of the mooring trial and this is currently out to consultation.

“So far we have received more than 470 responses from residents, boaters and our partners.

“All feedback will be carefully considered before the council makes a decision on the future of the moorings, by the end of the year.”

Visit https://www.bathnes.gov.uk/services/environment/river-and-canal/mead-lane-saltford-mooring-trial to respond to the consultation.