The Liberal Democrats have claimed overall control of Bath and North East Somerset Council for the first time. 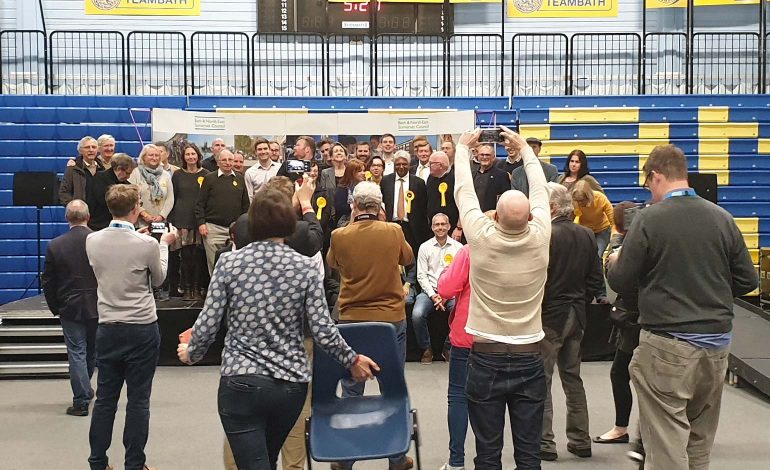 Outgoing Conservative leader Tim Warren was ousted from his Mendip seat, along with cabinet members and many long-serving councillors.

He admitted that the party had taken a hammering and said it would not recover until the national government sorted itself out.

Lib Dem leader Dine Romero was delighted with the result and said she was eager to get to work. Her colleagues include the first two BAME councillors in 20 years.

Speaking after the final results were announced shortly at around 5.30am on Friday, Mr Warren said: “I’m disappointed. I think the electorate have spoken out quite angrily. Whether they have spoken to us or central government is another matter.

“At the doorstep we couldn’t get them to differentiate between local politics and Brexit, and we got hammered for it.

“I thought we might lose a few seats. The way it fell apart is a shame.

“We left the council in a good place. We inherited the council with a £1.7million recurring debt and saved £49million.

“We left it with a balanced budget, which is better than we got it.

“Until Government has sorted itself out we can’t recover. 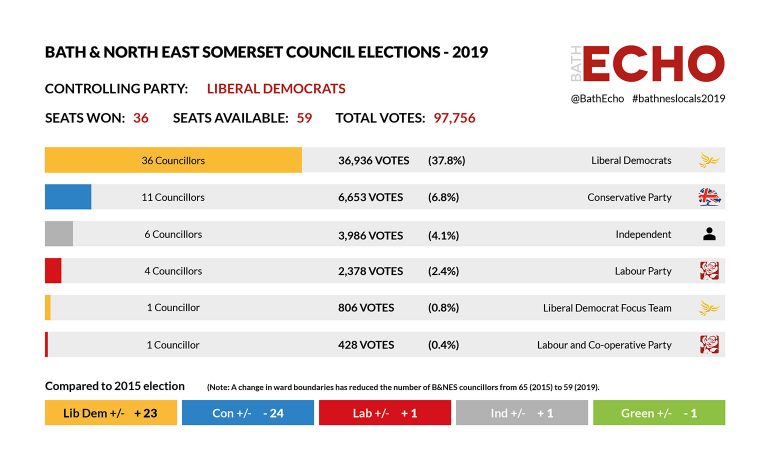 How the final results look, including how parties compare to the last election | © Bath Echo

Mr Warren has been on the council for 16 years and been its leader for the last four. He will hold the position until the authority’s annual meeting on May 21.

“It has a limited lifespan,” he said. “I would’ve like another couple of years but the electorate has chosen. I’ll get my life back.”

Mr Warren – who lost out to Lib Dem David Wood by 468 votes – said he would miss his colleagues, and welled up when outgoing chief executive Ashley Ayre commiserated him.

High-profile Conservatives like Bob Goodman, the cabinet member for communities and environment, and Mark Shelford, whose remit included transport and resilience, were among those who lost out to the Lib Dem surge.

Among the Lib Dems were two BAME candidates, the first to be elected to B&NES Council in 20 years – Yukteshwar Kumar and Bharat Pankhania.

The Conservatives were left without a single seat in Bath.

Councillor Romero was “exhilarated” by her party’s success.

“I’m delighted with the result and excited about the challenge that lies ahead and looking forward to getting on with the job,” she said.

“I’m delighted with the result. It shows that out residents that residents were clearly not satisfied with the Conservatives running the council as well as the Government.

“Partly this is a Brexit-related vote, but it’s also a reflection of the trust our residents have in us.”

37 councillors in B&NES, including @Jacob_Rees_Mogg’s new Lib Dem councillor. We are so incredibly proud of the campaign we have run and the opportunity we have here to #DemandBetter for everyone – change is coming! #WeWonHere #LocalElections2019 #LibDemFightBack

She said the party would deliver on its manifesto pledges, including one to create a new cabinet position to ensure the council delivers on its climate change promises.”

The previous council was made up of 65 councillors, 35 of whom were Conservatives.

The total number has been cut to 59, and 37 of them are Lib Dems. There are 11 Tories, six independents and five Labour members.

The Green, UKIP and the Bath and North East Somerset Independent Group failed to gain a foothold.

On the latter, Cllr Romero said: “BIG was made up a number of single-issue campaigners and perhaps they overestimated their appeal.”

The Conservative seats are in the Chew Valley, Clutton and Farnborough, Keynsham north and south wards, both Midsomer Norton wards, and Publow and Whitchurch.

Labour held on in Paulton, Radstock and Westfield.

For the independents, Colin Blackburn and June Player were re-elected in Westmoreland, Shaun Hughes won one of the seats in Midsomer Norton North, Douglas Deacon held Timsbury, and Sarah Bevan and Karen Walker will again represent Peasedown.

The highest turnout was in Widcombe and Lyncombe, at 56.09 per cent, while the lowest was in Westfield at just 22.62 per cent.

To find out who won in your ward, visit the dedicated page on the B&NES Council website here.