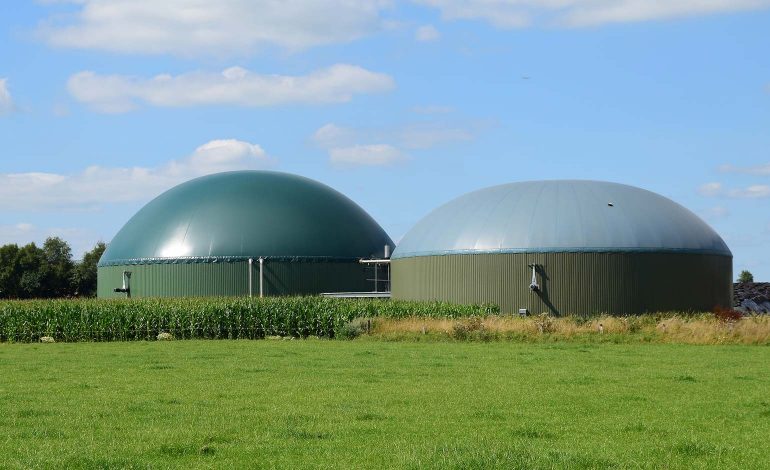 An example of the tanks used to store biogas | Library photo

Residents fear the roads will be choked with juggernauts and claim the “putrid” smell already emanating from the Charlton Field Lane site makes them feel physically sick.

If given the go-ahead, the anaerobic digester will process up to 92,000 tonnes of food waste and “energy crops” every year – more than three times the capacity of a facility approved in 2014 that was never completed after the firm went into administration.

The plant, sitting in the green belt, will produce biogas that can be used to generate electricity for the local community, or exported as a renewably sourced gas.

A couple who live nearby said in their objection: “The smell two weeks ago was so bad we couldn’t open our windows or doors to sit in the garden as the smell was making us feel ill.”

A man added: “I cannot stress how awful this smell is – it’s putrid and vile, to the point where it makes you feel nauseous. Friends of mine have even complained of burning eyes and shortness of breath.

“We have gone from having sweet smell of chocolate and caramel floating across the air to a foul-smelling faeces smell that sticks in the nostrils and throat.”

A woman with a lung condition said the odour had made her “physically sick”.

The former quarry opened as a composting site in 2001. Residents said the traffic, noise and smell of that caused them “significant” harm.

Planning permission was granted in 2015 for an anaerobic digester capable of processing 25,000 tonnes of food waste and energy crops each year.

A consultant representing three of the 30 objectors said the impact will be on a “totally different scale” to the last plans.

He said work on the previous plant had resulted in neighbouring homes frequently being flooded with a “pungent, foul-smelling waste”, and warned that could be exacerbated.

A man who lives downwind of the site, in Bilbie Green, said: “Not only are we contending with poor quality house builds, we are now being asked to contend with a possibly rancid smell which could force some people into staying indoors. This would make it extremely difficult to sell property.”

The plant will be open daily from 7am and 9pm and up to 58 lorries are expected to go to and from the site each day – equal to one every seven minutes.

Another objector said the smell would be a “constant harassment of the senses” and feared the “juggernauts” would be a “nightmare” on the already congested roads.

He said the facility would be better placed in Avonmouth, Chittening or Severn Beach as the roads are better suited and emergency services are trained for industrial incidents.

Councillor Alan Hale, who raised the case at a Bath and North East Somerset Council meeting on October 10, said the development was a “potential disaster” and the whole of southern Keynsham will suffer.

But the application says strict controls will mean the odour is “negligible” and the development will bring great benefits.

The smaller plant was due to go live in the spring of 2017, but Companies House shows applicant Resourceful Earth Ltd went into administration in October that year. What was built did not match the agreed plans.

The new scheme is from the similarly named Resourceful Earth Anaerobic Limited, which according to Companies House does not share any officers with its near-namesake.

“The site has been used for industrial activity for the past 80 years and is currently occupied by an incomplete anaerobic digestion plant which is in a disused state,” it says.

“The proposals seek to create a high quality environment, with an orderly, functional character, which enhances the existing degraded quality of the site and provides a safe, attractive environment for those working at the anaerobic digestion plant.

“Once the plant is active as a commercially viable unit, the economic benefits of this will provide for consideration to be given to improving the appearance and function in the old quarry.”

The plant will help divert food waste from landfill. It will use energy crops like maize from local farmers who will in turn be provided with nutrient rich bio-fertiliser, one of the products of the process.

Ward councillors have called for the application to come before the planning committee.

A date has not yet been set.

Bath businesses being invited to renew applications for support grants