Families are being given top priority to relocate as soon as possible as a social housing provider addresses the fire risk in 32 Radstock flats. 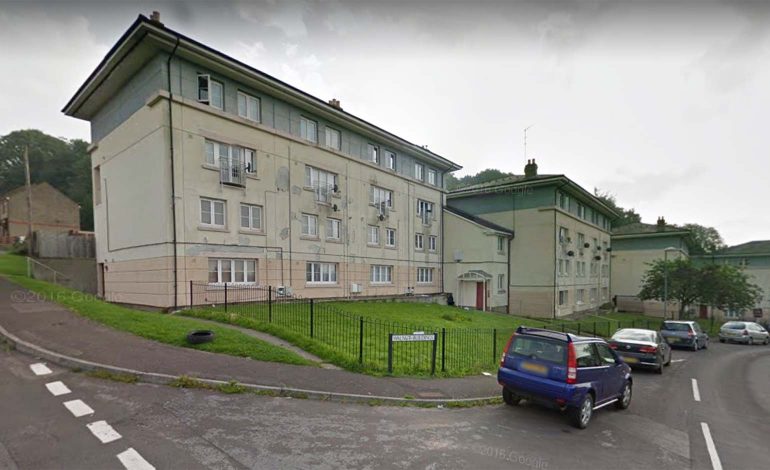 Curo is moving residents out on a temporary or permanent basis so it can understand the full extent of work needed to refurbish Walnut Buildings.

There is cladding on the building but Avon Fire and Rescue Service said it is not the same as the system used on Grenfell Tower.

The 113 occupants have been put at the top of Bath and North East Somerset Council’s Homesearch list, ahead of some 5,000 other households waiting for social housing.

A Curo spokeswoman said: “As part of a programme of major refurbishment and improvements we have carried out a number of detailed surveys and inspections to understand the condition of each of the blocks.

“This included a detailed fire safety survey which identified works that are recommended to maximise fire safety in the building and bring it up to modern fire standards.

“This detailed fire safety survey was in addition to routine fire risk assessments carried out on all four blocks at Walnut Buildings between October 2018 and February 2019 which showed that the fire risk in all blocks was low.

“To continue with the programme of improvements we now need to carry out structural investigations to understand in detail the full extent of work needed to refurbish Walnut Buildings.

“This will require complete access to every part of the estate, which will be disruptive and doing it while residents are living in the building will not be possible.

“This means that we will be helping each household in Walnut Buildings to find a temporary or permanent home to move to while this work happens.

“Residents will be able to move back to Walnut Buildings once the work is complete if they choose to do so.

“We appreciate that this will be a significant upheaval for some residents and we are having one-to-one meetings with every household to explain the arrangements.

“We have put extensive support in place to help every resident move to a new permanent or temporary home that meets their needs.”

Karl Venn, technical fire safety station manager for Avon Fire and Rescue Service, said there is cladding on the Walnut Buildings but is not the same as the system used on Grenfell Tower.

He said: “As soon as they were aware of the issue, Curo worked hard to put in place control measures to minimise the risk to a level as low as reasonably practicable in line with the Government’s advice note’s following the Grenfell tragedy, and continued to seek our guidance as to whether they could reasonably do any more.

“Some of the measures included patching up any exposed cladding with fire retardant materials, ensuring combustible materials were moved away from the buildings and upgrading the fire detection and alarms systems within each dwelling to a standard higher than required.

“As an organisation, we are fully committed to working closely with all of our key housing partners in relation to any fire safety concerns which are brought to our attention, as well as providing advice and guidance where required.”

Homesearch is the council’s housing register and allocation scheme for social housing in Bath and North East Somerset.

There are currently 5,396 households on the waiting list, six per cent of whom have a “very urgent” need.

The residents of Walnut Buildings have been put in this category.

The council said it would take 12 months to relocate them if they were given a lower priority, which “did not reflect the urgency of the repairs/risk”.

The only properties in Radstock are available for mutual exchange so the 32 households may have to relocate outside the town.

Councillor Tim Ball, cabinet member for housing, planning and economic development, said: “We have given all affected residents in the social housing scheme at Walnut Buildings the highest priority under our Homesearch scheme and we are working to relocate those residents to suitable accommodation as soon as possible.

“The landlord has advised us that this will be a temporary move, but as with any application to Homesearch, people can express an interest in any advertised property that meets their needs and applicants with the highest priority are considered first.”

There is also a terrace of houses with the Walnut Buildings address but they are not affected by the refurbishment works.