Proposals, which would see all higher emission vehicles including cars, being charged to drive in a Clean Air Zone in Bath have been published, and are now out for public consultation. 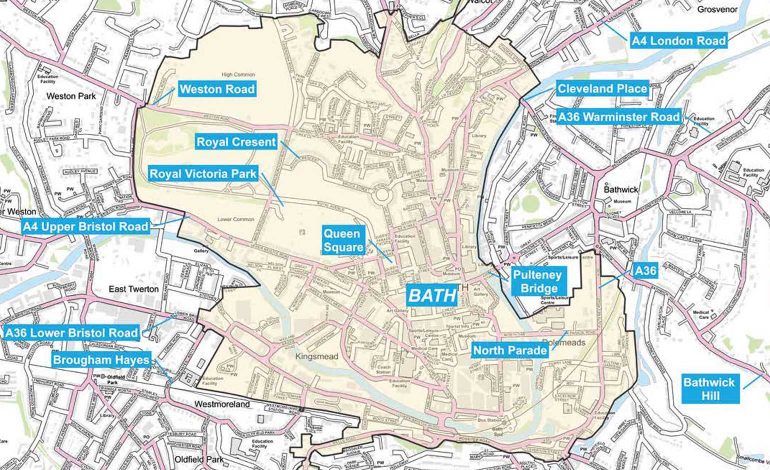 Bath and North East Somerset Council has announced its proposals and the start of a six-week public consultation on a Charging Clean Air Zone in Bath’s city centre, plus a ‘package of support’ for the community.

The council has been told by Government, along with 27 other authorities, to take urgent action to reduce dangerous nitrogen dioxide levels caused by vehicle emissions in the shortest possible time and by 2021 at the latest.

There are areas of Bath where NO2 currently exceeds EU and national limits. High levels of NO2 make heart and lung conditions worse. In the short term, high levels can trigger asthma attacks. Over the longer term it’s linked to reduced lung development in children and the increased possibility of heart attacks and dementia.

The council has looked at schemes that excluded cars and vans, but says the best course of action to achieve compliance in the shortest possible time, and by 2021 at the latest, is a ‘Class D’ CAZ.

Analysis also shows a smaller central zone would have the impact of improving air quality across the city and beyond, while minimising the impact on residents and businesses.

The proposed Charging Clean Air Zone would mean drivers of higher emission vehicles would be charged when entering the proposed zone in the city centre from late 2020.

Revenue from the proposed zone would be used to run the scheme and any surplus would be used to support greener modes of travel. The proposal has not designed to raise any income for the council.

B&NES Council says the boundary has been carefully drawn, taking into account residents’ views, to reduce opportunities for short cuts.

Councillor Bob Goodman, Cabinet Member for Development and Neighbourhoods, said: “Like many councils up and down the country we have to address NO2 levels which are harmful to people’s health, and we’re being told by the Government do to that in the shortest possible time.

“This would mean the introduction of a Clean Air Charging Zone by late 2020. There is no doubt this proposal would have an impact on residents driving higher emission vehicles and businesses, and we want to strike a balance with a package that can deliver clean air as soon as possible, while supporting residents and businesses in making the transition to a cleaner, greener local economy.

“We cannot achieve this alone. If people want to see sustainable health improvements for future generations, we have to consider this option which would bring about a reduction in harmful emissions and along with other measures help make Bath a clean and green city.

“The consultation over the next few weeks is on a Class D CAZ alongside a range of exemptions, concessions and supporting measures designed to help groups particularly impacted by the proposals.

“We will then assess the feedback from this consultation before making a final decision.”

Councillor Mark Shelford, Cabinet Member for Transport and Environment, added: “The council has looked carefully at other options such as not charging higher emission cars, but technical analysis shows this would not be guaranteed to sufficiently reduce NO2 in the time available.

“As well as the proposed Class D Clean Air Zone, we’re looking at a package of measures such as concessions for vulnerable groups, financial support schemes for residents and businesses that need it most, public transport improvements and extending the operating hours of the park and ride.

“Right now we want to talk to people and listen to their views ahead of a decision on a final proposal in December.”

Which vehicles will be affected by the introduction of the Clean Air Zone?

The proposed charges would only apply to higher emission vehicles that do not meet the Government’s minimum, national emission standards to travel without charge in a Charging Clean Air Zone.

Vehicles that meet the Government’s minimum standards and which would not be charged in the proposed zone are:

Vehicles that do not meet the Government’s minimum standards and which would be charged in the proposed zone, unless exemptions or concessions apply, are:

The public consultation will run until Monday 26th November. The council is inviting everyone to read a summary of the proposal and take part in its questionnaire.

A number of open public events are also being held throughout the consultation period, listed at the bottom of this story.

More information, including online questionnaires, can be found online at www.bathnes.gov.uk/breathe.

Printed summaries and questionnaires can also be found at local B&NES libraries and One Stop Shops.

There are planned drop-in events are on:

A short video has been created to explain the proposals. It can be viewed here: https://www.youtube.com/watch?v=ZVx1aR3nMbk