The £215,000 debt of Bath’s loss-making tourist office will be written off as it joins forces with Bristol’s and city bosses “reconsider” the role of “traditional mass tourism”. 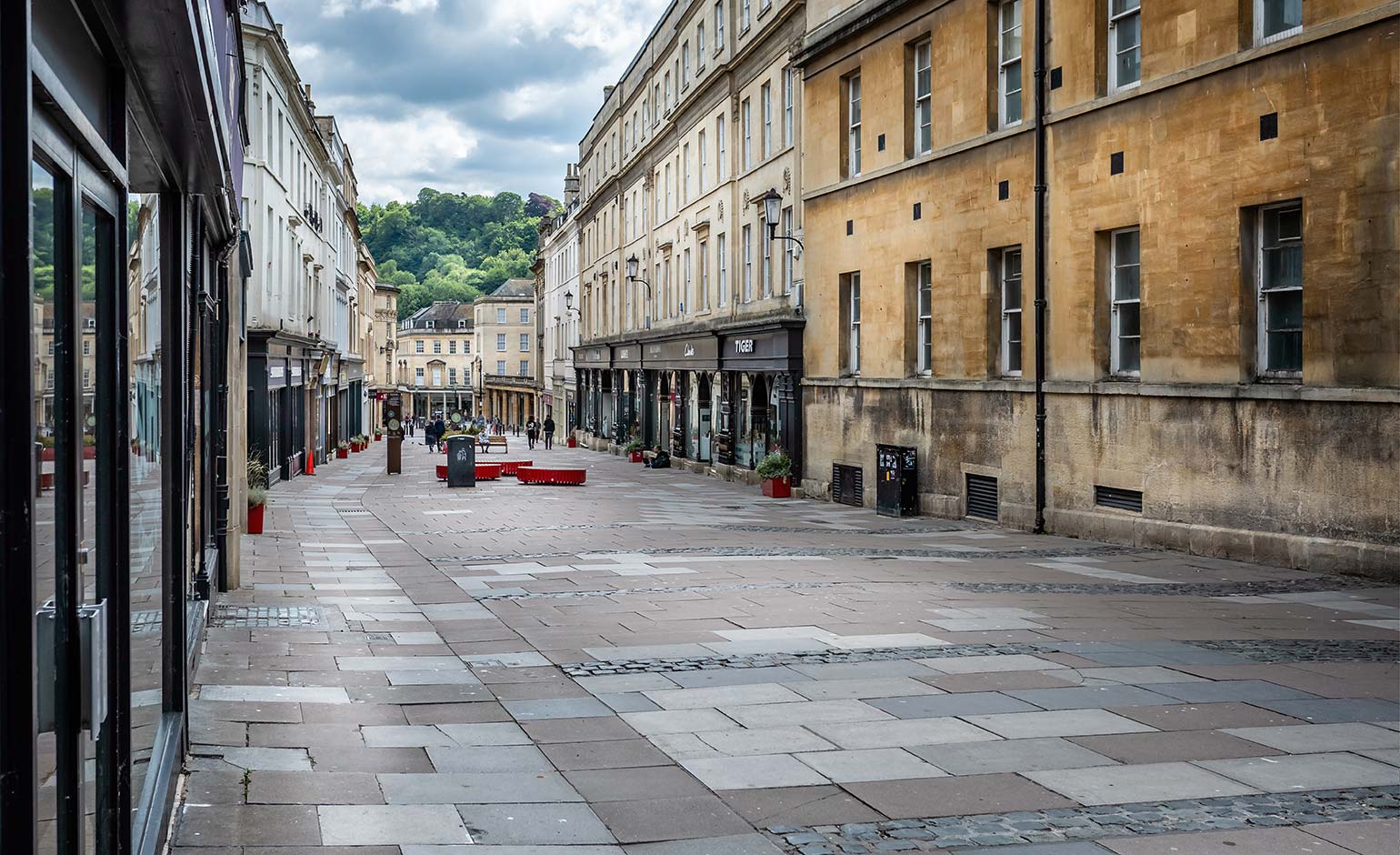 Union Street in Bath back in May, during the first coronavirus lockdown | Photo © Nigel Jarvis / Shutterstock.com

Bath and North East Somerset Council will only have one vote out of eight in the new Visit West partnership, with the others going to neighbouring authorities and the region’s chambers of commerce.

Conservative group leader Paul Myers warned that Bath’s voice would be diluted and the city would “never forgive” the Liberal Democrat administration for the damage it will inflict on the economy.

Deputy council leader Richard Samuel hit back at the Tories’ lack of oversight of Visit Bath, which lost £588,000, and pledged a review of the council’s arm’s-length companies.

Council leader Dine Romero told her cabinet colleagues on 10th December: “This draws to a close a somewhat sorry state of affairs for the company charged with promoting Bath and the surrounding area.

“This company has been losing money since 2016, and despite new management being brought in last year, this position hasn’t improved significantly.

“Clearly, Covid-19 hasn’t helped the situation. In the inter-lockdown period we saw numbers of visitors starting to improve, but this brought a risk to public health.

“Until the majority of people across the globe have been vaccinated, I think it would be foolish to expect a return to the old normal of tourist numbers.

“We want to encourage the change in behaviour towards zero-carbon living, which means traditional mass tourism – with its associated negative consequences – needs reconsidering.”

Before the pandemic, tourism employed around 9,000 people in Bath and North East Somerset and Cllr Romero said it will remain a vital part of the economy.

But she added: “We need to look at rebuilding this industry in light of the subtly changed world.

“We simply can’t afford a destination management that runs at such a loss. I’d like to recommend that we cut our losses and support the new venture being proposed.”

Despite redundancies and cost reductions during the pandemic, a report to cabinet said Visit Bath was no longer financially viable.

The cancellation of Bath’s Christmas market this year meant it was unable to cover the operating costs. The visitor centre in Terrace Walk closed in March.

Visit West will bring together B&NES Council with its counterparts in Bristol, North Somerset and South Gloucestershire, which will each have one vote on decisions, and Business West, which will have four.

Over a decade, the partnership is expected to save B&NES Council £2million. A debt of £215,000 will be written off.

Cllr Myers said: “Given the devastating impact of Covid-19, supporting the sector is critical to securing people’s livelihoods.

“Why is this administration handing over control of our destination management and diluting the message across such a huge area. Apparently the aim is to save £2million – but at what cost to the local economy?

“I don’t think you’ll ever be forgiven for the undoubted damage you’re about to inflict.”

Cllr Samuel said: “This is a sorry saga. This includes the writing off of irrecoverable debt.

“The closure of this arrangement is a serious matter. The company’s finances began to drift into deficit in 2016. It’s very concerning to me that the previous administration failed to act as the losses of £588,000 were accumulated during their term in office.

“It suggests there were fundamental weaknesses in governance that led to this situation. It must never be the case that anything similar can happen again.”

He called for a review of the governance for the council’s arm’s-length service providers.

The cabinet voted for B&NES Council to join Visit West.

The Visit Bath brand will remain and the booking office will be housed at Bath Forum.

The Visit West merger was announced in July.

Kathryn Davis, the interim chief executive of Visit Bath and head of tourism at Destination Bristol, said at the time: “Destination Bristol and Visit Bath enjoy an existing and longstanding collaboration, so now is the time to consolidate and cement that relationship to give the region one strong voice.

“A united destination management organisation will have the skilled staff and resources to provide excellent professional services to all its members across the West of England.”