A campaign is being launched by Bath & North East Somerset Council to encourage parents and carers who use their cars to do the school run to switch off their engines and stop idling by the school gates. 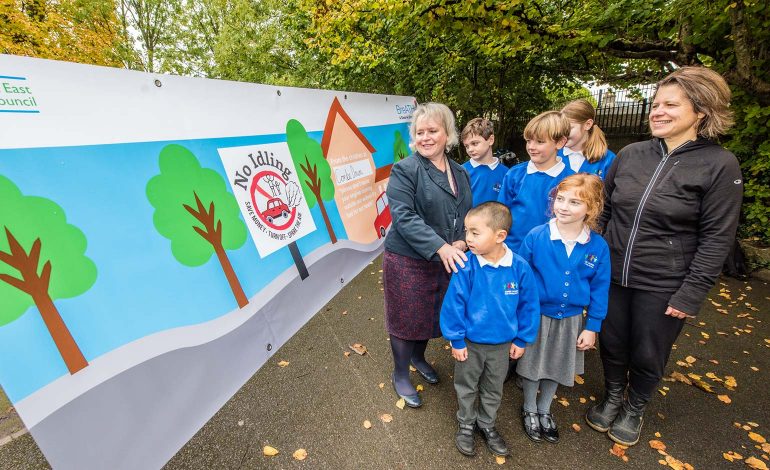 Idling is when a vehicle’s engine is left running for more than 30 seconds when a car is not moving.

Research shows that idling engines produce up to twice the amount of exhaust emissions compared to when a vehicle is moving.

This means in areas where there are high numbers of idling vehicle engines, such as outside schools, levels of carbon monoxide, nitrogen dioxide NO2 and particulates build up.

These substances are linked to several health issues including lung and heart diseases and young children are particularly vulnerable to their effects.

As part of the council’s Bath BreATHes 2021 campaign, primary schools across the district are being encouraged to put up posters and banners and hand out postcards encouraging parents to stop idling outside the school gates.

Teachers can download the resources which have been designed to support the council’s Clean Air Schools Toolkit.

The toolkit was launched earlier this to support teachers with lessons and activities to raise awareness of the causes and impact of air pollution and how to combat it.

Jane Gascoigne, Headteacher of Combe Down School in Bath said: “The health of our pupils is of paramount importance and idling outside schools needlessly pollutes the air the children breathe.

“From a road safety point of view, it’s also harder for pupils to hear moving vehicles when cars nearby are idling.

“We’ll be using the banners, posters and postcards to encourage parents to take action, switch off and make a real difference.”

Councillor Joanna Wright, cabinet member for Transport Services, said: “Air pollution affects us all and idling outside school gates at drop off and pick up means that children are exposed to increased and unnecessary air pollution.

“There is absolutely no need to idle and by switching off engines air quality can be improved. I’d also urge parents to park appropriately outside schools by not parking on double yellow lines or zig zags.

“Of course, the best solution is for children to walk, cycle or use buses to get to and from school and I’d encourage families to seriously consider these options.”

Getting involved in the anti-idling campaign will help schools to achieve a Modeshift STARS award.

The awards scheme recognises schools that have demonstrated excellence in supporting sustainable travel.