Bath Foodbank fed 4,500 people who were in crisis last year. Volunteers say the overhaul of the benefits system and the introduction of Universal Credit was to blame for many referrals. 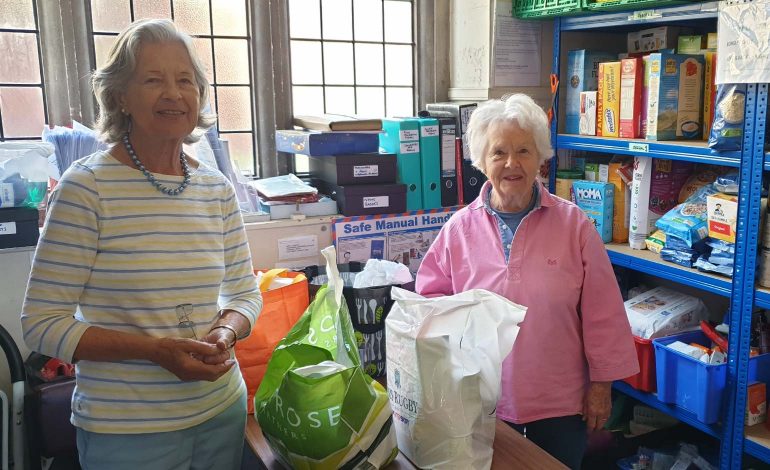 They say they experienced a sharp increase in numbers a couple of years ago.

They feed some 90 people a week – they may be in work but on low-paid jobs, their marriage may have broken down, or they could be unemployed due to mental health issues.

“When people tell us their stories I often feel they are worse than they say.

“It’s not uncommon to meet people who were managing well and then found themselves in the position of using the food bank.

“It’s not our job to question anyone. We’re just here to welcome them and show them some respect and compassion.”

It calls on the authority to draw up a food poverty action plan to tackle what the Government defines as “the inability to access or afford food to make up a healthy diet”.

Bath Foodbank is part of the national Trussell Trust network and locally comes under the Genesis Trust.

It serves the people of the city and the surrounding area who are referred by other agencies, like Citizens Advice, or B&NES Council. Most people only visit once or twice.

“Demand was fairly steady initially. Over the last two years it’s been quite a lot higher, which is likely to be down to changes to the benefit system.

“The initial guidelines for the food bank were that people shouldn’t come more than three times in six months.

“With Universal Credit, that’s been relaxed. It meant people were waiting six weeks or more for their benefits to come through.

The wait for Universal Credit has now decreased to five weeks and people can get interim payments to tide them over – but that money has to be repaid.

Across the country, Trussell Trust food banks handed out a record 1.6million food parcels to people in crisis in 2018/19, a 19 per cent increase on the previous year.

It says issues with benefits are the main reason people need emergency food and is calling for an end to the five-week wait.

Returning to the local picture, Tim said: “Demand doesn’t alter too much in the year but supply goes up enormously at harvest time and at Christmas. From September to December we have a lot of food coming in.

“It’s all volunteer-run. There are no salaries to pay. Every donation, whether food or financial, goes into running the enterprise.

“It’s something a lot of people want to help with – food is such a basic human need.

“By donating food, they know they are doing something to help people who are hungry.

“The problem with some charities is you don’t know where your money is going. There’s only one thing you can do with food, and that’s give it to people to eat.”

The food bank has three centres, in churches in Milsom Street, Twerton and Southdown. The leaders are looking to open another in Foxhill.

They have access to a warehouse in Batheaston that is made up of four shipping containers in a barn. Tim said it is not the nicest working environment but beats the previous setup, when the containers were out in a field.

“The ideal location would be central and undercover,” he added. “In Bath that’s very expensive.

“Environmentally, it doesn’t make a lot of sense running a van to and from Batheaston so much. It’s not an effective way of doing things.”

In a bid to remedy that, Tim recently commented on the council’s plans to level Parkside Children’s Centre and extend the Charlotte Street car park.

He said in his representation: “We would like to investigate using Parkside as a more appropriate storage facility for food donations and hopefully as a distribution centre.

“Having both on one site would make logistic and environmental sense. There may be scope to share the use of the premises with other community services.”

A decision is yet to be made on the children’s centre.

Over the summer holidays, Bath Foodbank is again helping families whose children are eligible for free school meals and have to spend more on food outside of term time, and potentially childcare costs.

They are supported with food and last year got vouchers for activities like swimming.