Drivers entering Bath could one day have to pay a congestion charge, on top of the clean air zone bill that will be levied on many dirty vehicles. 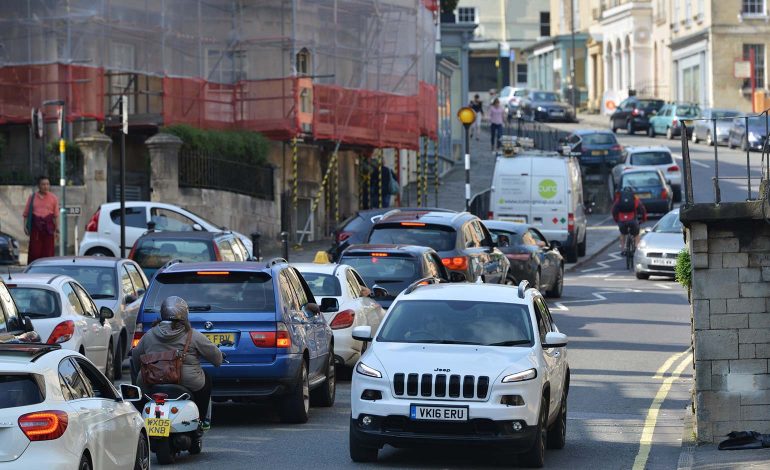 Paying to park at work and council tax hikes are also being considered to plug a £6billion black hole in funding for new infrastructure across the region.

The West of England’s new joint local transport plan (JLTP4) says upgrades of existing road and rail networks and a slew of new schemes are essential to make the region carbon neutral by 2030.

The 20-year wishlist calls for better public transport between Bristol and Bath, a new train station at Saltford, a new park and ride on the east of Bath, and improvements to walking and cycling.

But it is unclear how much of it is deliverable.

The total cost will be £8.9million, or up to £600million a year. The previous plan saw £500million spent on infrastructure in seven years, which is itself described as a significant achievement.

The JLTP4 says the investment is necessary to cut car use, but will require a “step change” in funding to provide transformational infrastructure and it is unrealistic to assume central government will plug the £6billion gap.

Bath and Bristol are both introducing clean air zone charges to cut illegal levels of nitrogen dioxide in the cities, with daily fees for the worst polluting vehicles – but not cars.

The JLTP4 says: “The introduction of charging mechanisms, such as road pricing covering the Bristol and Bath urban areas, would raise a significant amount of revenue.

“This would help fill the funding gap and raise revenue for infrastructure delivery, but would be extremely challenging to deliver.

“Phasing will need to be considered carefully in order to ensure that effective alternatives to private car use are implemented in tandem with the roll-out of any charging mechanism.”

The idea of congestion charges were popular in last year’s JLTP4 consultation.

What new infrastructure is proposed?

The JLTP4 says a mass transit network could dramatically improve journey times across the Bristol and Bath urban areas, and take passengers from central Bristol to Bristol Airport within 15 minutes.

The network will be complemented by metrobus, the new bus network in Bristol.

The JLTP4 says a mass transit system for Bath is part of the solution to reduce congestion, ease traffic pollution and re-energise the economy.

“Through further detailed technical work, the major role trams could play in helping to meet the future growth and transport needs of the city, and improved connectivity with Bristol, will be established.”

All key routes within Bath will be considered, including:

Bath Trams spokesman David Andrews commended metro mayor Tim Bowles for including trams in the plan as an alternative to rubber-tyred buses.

But he said it was a pity a metrobus extension was being mooted between Bath and Keynsham, saying it had been “well proven that buses cannot attract car drivers out of their cars, whereas trams can”.

Many of the buses across the region, including metrobus, are run by First West of England. Managing director James Freeman said: “If we are to maintain the quality of life in Bath and North East Somerset, we are going to need some decisive action to tackle to appalling congestion that is more and more blighting not just the city of Bath but the whole area.

“This will need more priority devoted to public transport on the street, coupled with the encouragement of walking and yes, even in Bath, cycling.

“We welcome the stated desire to see the development of a rapid transit system not just between Bath and Bristol along the A4 corridor but also within the city.

“While there may well be ambitions for rail-based solutions on the street, buses can actually meet these needs perfectly well as long as they have proper priority. This plan points the way towards some radical solutions and we welcome it.”

Transport campaigner Dave Redgewell said the plan had too little emphasis on getting people out of their cars and onto public transport.

Chief among the new roads proposed for Bath and North East Somerset is the South East Bristol Orbital Corridor, which would connect the A4 to the A37.

Its inclusion has sparked disappointment from campaigners who rallied against it.

South Bristol Wrong Road founder Faye Dicker said the 1,600 people who objected in the JLTP consultation “were not being listened to”.

She said: “At a time of a climate emergency, it is a backwards step to destroy valuable green belt and build more roads. We all know, more roads, bring more traffic.

“We want to see an end to the whole ring road concept through green fields at enormous cost in financial and community terms.”

Ms Dicker said the next JLTP should bring radical changes to mass transit, through light rail and the use of trams powered by green energy, along with better walking and cycling options.

The plan says: “There is poor infrastructure and public transport service facilitating orbital movements around south east Bristol and the surrounding area.

“The lack of any orbital connection is forcing people to drive along the A4 and use unsuitable local roads in residential areas. This adds more traffic to the already heavily congested A4.

“This is preventing us from reallocating road space to transformational and sustainable modes such as Mass Transit and other low carbon travel options.

“Comments received through the JLTP consultation raised concerns that residents felt that plans are well developed, however only initial modelling options have been assessed at this stage and we have much more to do, in consultation with the local community, to develop the plans and any future infrastructure solutions further.”

The JLTP also refers to a new Saltford bypass, but further work will be done to assess options for bus priority on the approaches to the village before a decision is made.

New train stations will be considered at Saltford, along with Charfield, St Annes Park, Saltford, Ashton Gate and Constable Road, and there could be new rail links to Thornbury, Pilning and Bristol Airport.

Saltford station is described in the plan as an “early investment schemes under development”.

The JLTP4 says: “We support the concept of a ring of park and ride locations around the urban areas, to help tackle traffic and air quality problems in central areas.

“In Bath, the priority is to intercept traffic on the A4 corridor to the east of the city.

“We will promote further expansion and improvement of the existing park and ride sites at Newbridge, Lansdown and Odd Down.

“We will deliver the Freezing Hill junction upgrade and improvements at two other junctions along the route between the A420 and Lansdown park and ride.”

A new park and ride could be built in Whitchurch, and another is being mooted south of Hicks Gate junction to replace the existing Brislington park and ride.

“Completion of a continuous and integrated network of strategic cycle routes, comprising key corridors and cross city routes, complemented by improved permeability and investment in public realm in the city centre.

“This network will connect key destinations across the Bath urban area.

“Local routes will be improved and integrated into the strategic network as part of ongoing programmes.

“Bath city centre is in a natural ‘bowl’ with steep slopes into the city centre from the north and south.

“This is likely to constrain the attractiveness of cycling from the north and south, and the primary opportunities will be on east-west corridors in the city.”