The Bath Magazine has been forced to apologise after their February 2014 edition cover was shown to be a copy of the Boston Magazine’s cover from directly after the Boston bombings. 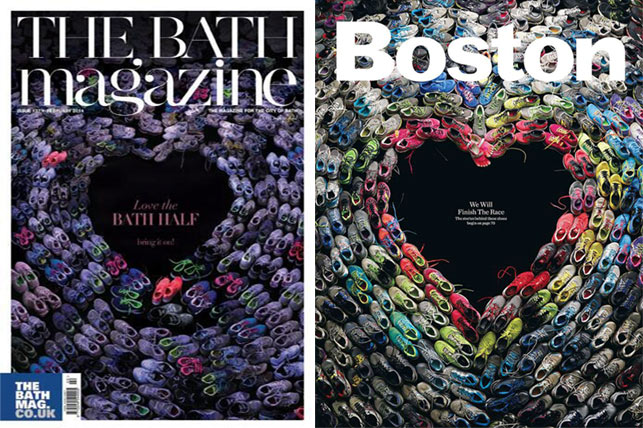 The Bath Magazine, who are an official media partner of the Bath Half marathon, used their February edition cover to promote the half-marathon in the city, with the phrase ‘Love the BATH HALF’.

The idea for the original cover was thought up by the Boston Magazine’s design director Brian Struble and deputy director Liz Noftle back in April 2013, the night after the Boston bombings.

The staff at the Boston Magazine decided to scrap the previously planned cover for May 2013 and went with their new design to promote the resilience  of Boston and the heartfelt stories of those involved.

The Bath Magazine posted a message on Twitter apologising for any upset or offence the replicated cover design had caused.

We would like to make an unreserved apology for any upset or offence caused by our latest cover. This was clearly not our intention.

@sirosenbaum @bathhalf we don’t mean to bring up bad memories, just supporting our runners in Bath

The Bath community has also expressed their shock at the cover design, saying the magazine should be recalled and that it’s ‘tacky’.

Comments from around the world have criticised the decision to re-create and use the image.

@TheBathMagazine This isn’t even an homage to the Boston Mag cover, it’s a blatant rip off, and for what purpose?!
— Nicole (@nicole_cuts) January 28, 2014

Well done @thebathmagazine you’ve not only shamed yourselves round the world, but also @bathhalf and our beautiful city 🙁

In a post on the Boston Magazine’s website, the editor Carly Carioli has requested that the Bath Magazine “make a significant donation to the One Fund in the name of those who were unable to finish the race.”

The Bath Magazine have now made a statement about the design of their front cover, in the form of an open letter on their website to the Boston Magazine.

It says: “The Bath Magazine publisher Steve Miklos would like to offer his sincere apologies to anyone who found the similarity between our image and the Boston Magazine cover in any way upsetting, as clearly we did not wish to cause any offence.”

Mr Miklos continues: “Late in the process of creating our front cover we were made aware of the Boston Magazine cover, and while we were inspired by it, we realize we have made an error of judgment by not fully realising its connotations in the States.”

“Please accept our apology from one community to another and accept that our intentions were well meant.”

You can read the full letter on the Bath Magazine website here.

Organisers of the Bath Half marathon also released a statement, which can be read in full here.

Andrew Taylor, race director, said: “The choice of content and design for the magazine was entirely Bath Magazine’s decision. We are sure that no offence was intended, and we endorse Bath Magazine’s sincere apology for any distress caused.

“Out of respect to the comments raised we have removed reference to the magazine cover from our own social media.”