The Chelsea Flower Show Diamond Jubilee Award has been given to South West in Bloom for their display which features ‘The Herbs’ created by Bath’s Parks and Green Spaces team. 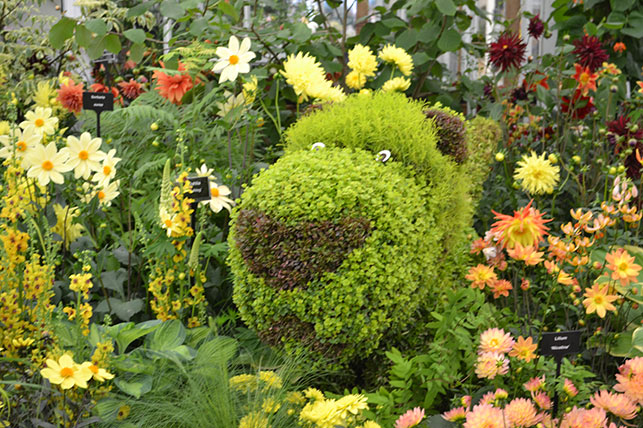 “The Herbs” are making a guest appearance at the spectacular display in the Great Pavilion of the Chelsea Flower Show.

The models of Parsley the Lion, Dill the Dog and Bayleaf the Gardener devised by Bath & North East Somerset gardeners using over 2,000 plants are an integral part of the special “Fifty Golden Years of Bloom in the South West” Garden, celebrating 50 years of Britain in Bloom (Stand GBP14).

The display was officially opened by Ian Gillan of Deep Purple who described it as an inspirational garden. Ian from Lyme Regis explained how he enjoys living in “such a beautiful part of the country” with such a variety of landscape and plants.

Bath was the first ever winner of the national competition in 1964 and took the title again in 1968. Since then Bath has won the Britain in Bloom best city category ten times and won the regional South West in Bloom title 22 times, including last year.

Chairman of the Bath in Bloom committee Barry Cruse said: “I am over the moon that the expertise of the guys at the nursery has been recognised on the world stage, it is a brilliant result for the Southwest in bloom exhibit and Bath.”

The garden is designed by Jon Wheatley of Stonebarn Nurseries from Chew Magna who already has 20 Gold Medals to his name.

Jon, who also chairs South West in Bloom, said: “It has been exciting to mark the 50th Anniversary with this special South West in Bloom Garden. It represents the commitment to horticulture and creative community involvement in the region.

“The Garden is a true reflection of people working together in partnership.

“We have received more entries from the South West region for Britain in Bloom 2014 than ever before. The theme of Growing for Gold has really caught everyone’s imagination”.

Jon’s son, James Wheatley was on hand to help build the 48 square metre exhibition garden which has taken seven days.

He said: “I love Chelsea and it is so refreshing to see so much colour. The section of the garden that represents Bath reflects the traditional of floral displays is the city with flamboyant use of colour. We want to show the public not to be afraid of colour, to use it confidently.

“We have included special plants from Devon and Cornwall that are unique so the garden has great elements of individuality. The wild garden even attracted an urban fox during the build period.”

Terry Potter from South West in Bloom has grown the vegetables for the Chelsea exhibit which he says is the best yet of his collaborations with Jon Wheatley with a real “wow” factor with “fantastic support from cities like Bath”.

He is passionate about the theme of volunteering and said: “We are trying to promote Bloom in the south-west to encourage more cities to get involved and communities to take ownership of the gardens in their cities and volunteer”.

Beautiful Fife is one of the sponsors for the exhibit and the garden will be recreated by the same team at Gardening Scotland in the Royal Highland showground in Edinburgh, opening on 30th May.

The Herbs were created by Bath & North East Somerset Council parks department for a display in Parade Gardens in Bath in 2013 and impressed the judges of Bath in Bloom and proved a popular feature with the public.