A senior nurse at the Royal United Hospital in Bath has been honoured after putting her emergency lifesaving skills into practice when she witnessed a serious road traffic collision. 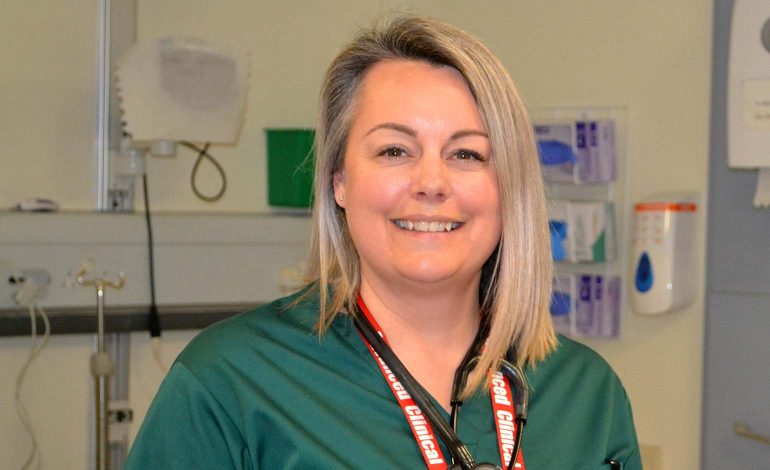 Vicki Mockridge, an Advanced Clinical Practitioner working in the Emergency Department of the RUH, leapt into action when two motorbikes and a car collided on the A4174 at Longwell Green, near Bath in June 2018.

She said: “I was driving home on the dual carriageway when I saw bits of metal flying into the air. I stopped my car immediately and jumped over the central barrier to help.

“People were shouting that one of the riders, a woman, wasn’t moving. So I ran to help her and I found her face down and quickly identified that she wasn’t breathing.

“We rolled her over, and I removed her crash helmet and cleared her airway. She started breathing again and I remained with her until the ambulance and air ambulance medics arrived.

“I later found out that she had a few broken bones and suffered a brain haemorrhage. Thankfully she’s made a good recovery.”

Vicki, from Bristol, has worked at the Trust for 18 years, initially as a newly qualified nurse and now a Senior Sister/Advanced Clinical Practitioner.

She was nominated for a Royal Humane Society award by Avon and Somerset Police.

She received two awards – the Testimonial on Parchment, for a person who puts themselves in danger to save someone else, and the Resuscitation Certificate, for the successful resuscitation of someone who was at one stage ‘seemingly dead’.

Vicki, who has advanced life support training, said: “I had no idea I’d been nominated, so it was massively unexpected when I was awarded the certificates. I’m just glad that I happened to be on the spot when the collision happened and that I was able to help.”

Nicky Jakeman, Clinical Lead in the RUH Emergency Department, said: “I have worked with Vicki for many years and it comes as no surprise to me that she has gone above and beyond what most ordinary people would do.

“She is an exceptional individual who is a role model for those working with her, always putting patients first and driving herself to always do better.

“Vicki should be immensely proud of saving this person’s life in difficult circumstances. It is an honour to know and work with her.”