The first patient has been recruited for a UK-wide trial into tackling one of the most disabling complications of Parkinson’s disease, led by the Royal United Hospital and the University of Bristol. 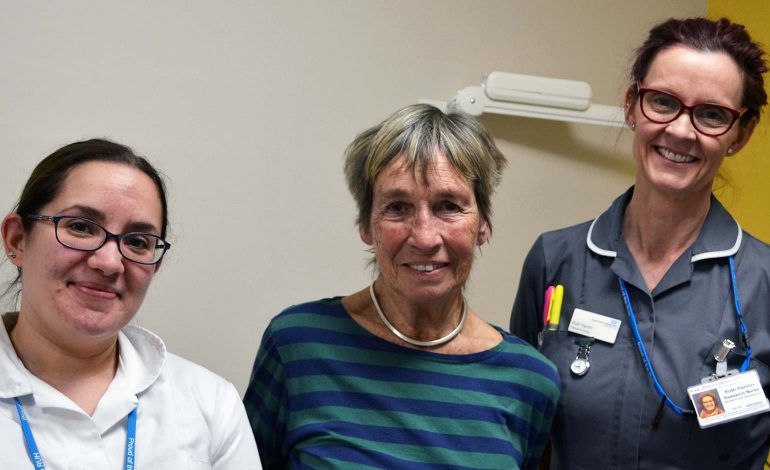 The trial, funded by a £2.1 million grant from the National Institute for Health Research (NIHR), will test whether a commonly prescribed dementia drug could prevent debilitating falls for people with the disease.

Falls are a frequent complication of Parkinson’s, leading to patients suffering from injuries and broken bones and often needing hospital admission.

RUH Research Lead Nurse Ruth Hamlin said: “To recruit our first patient is hugely significant and marks the official start of what is a really important study.

“While there is no cure for Parkinson’s, our hope is that this research and its eventual findings will help to improve patients’ quality of life.”

Gitte Dawson, from Freshford, near Bath, was diagnosed with Parkinson’s seven years ago and has experienced a number of what she describes as ‘Parkinson’s falls’.

She said: “I’m very interested in this research and learning about its findings. It’s very practical and do-able for a patient like me on a daily basis, which is important because we’ll be taking part for a year.”

The three-year trial is led by Dr Emily Henderson, a Consultant Geriatrician at the Royal United Hospital in Bath and Senior Lecturer at the University of Bristol.

It will recruit 600 patients across 26 UK hospitals to determine whether a drug, known as a cholinesterase inhibitor (ChEi) will help people with Parkinson’s.

Earlier phase trials have shown that ChEi treatment has the potential to almost halve the number of falls and improves the regularity of walking, speed, and balance.

Dr Henderson said: “This research will provide definitive evidence as to the role of these drugs for falls. We are working hard to tackle one of the most disabling complications of Parkinson’s and, if successful, this treatment will improve the lives of people living with Parkinson’s now and has the potential to be tested in other groups of patients who are at high risk of falling.”

Trial patients will be randomly assigned a 12-month course of either a ChEi via a patch or a placebo (dummy) treatment.

However, neither the researchers nor the participants will know which group they are in. Patients will be asked to record any falls that they experience in diaries that they post back each month for a year.

Dr Tim Craft, Trust Director of Research and Innovation, said: “I’m delighted that this trial has now begun and proud that the RUH is leading with the University of Bristol in such important research that has the potential to benefit people worldwide.”

Findings from the trial, funded by the NIHR Health Technology Assessment programme (HTA), will be published in a research journal.