A special owl sculpture decorated in memory of a teenage girl called Evie Clover has gone on display at the Royal United Hospital in Bath. 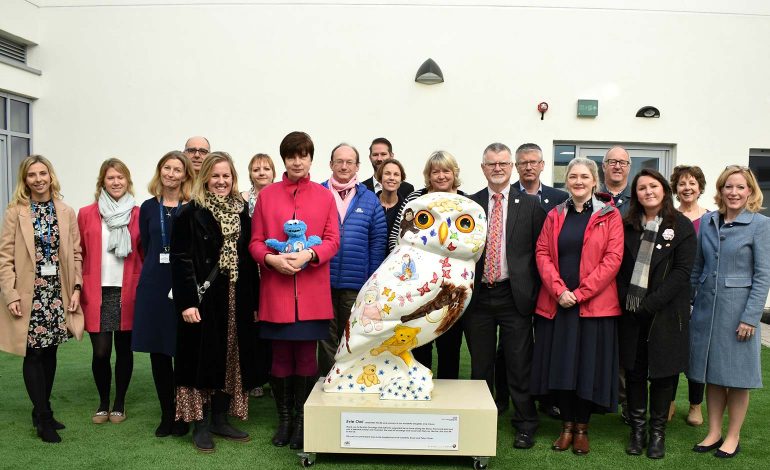 Evie’s parents, relatives, friends and staff gathered on Friday 29th November to see it in the garden of the RNHRD and Brownsword Therapies Centre.

Evie’s parents Patsy and Bryan won a plain, unpainted owl model at the Minerva Owls auction that followed the public art sculpture trail, which featured over 80 individually decorated super-sized owl sculptures in Bath and surrounding towns – and the idea of Evie Owl was born.

Bryan Clover, Evie’s dad said: “After we won a blank owl at auction we decided to have it painted with Evie’s favourite toys from when she was little.

“It seems fitting that the decorated owl has come here to the hospital, where it will be seen lots of families and children, and where Evie’s name and memory will be maintained.”

Evie was 13 years old when she passed away from an aggressive brain tumour in January 2018.

Polly Bates, RUH Paediatric Oncologist who helped care for Evie said: “Evie was truly a remarkable young woman and it was our privilege to care for her at home when she was so poorly. She leaves a legacy and a bit of magic and it’s so nice to have this special owl to remember her.”

“I’ve tried to produce something that’s appropriate and I wanted it to be just right. I’m very happy with the end result and glad that the owl is on display to help to remember Evie’s life.”

A plaque underneath Evie’s Owl reads ‘Evie Owl celebrates the life and memory of our wonderful daughter, Evie Clover. Thank you to the RUH Oncology Unit staff who supported her at home during her illness.

‘Evie loved sport and was a talented scholar and musician. She was full of energy and would wish that you, like her, live your life to the full.’

After Evie passed away, her parents set up a charity and called it Evie’s Gift. The charity aims to give financial assistance to parents whose children have been admitted to hospital with a life-threatening or life-limiting condition and to fund research into the rare brain cancer that took Evie.

Evie’s Gift aims to pay for two or three nights’ accommodation locally and help meet other costs associated with being near your child while they are in hospital. For more information, visit www.eviesgift.org.uk.