Two new Cuddle Cots have been donated to the maternity ward at the Royal United Hospital, so parents can spend longer with babies that have been stillborn. 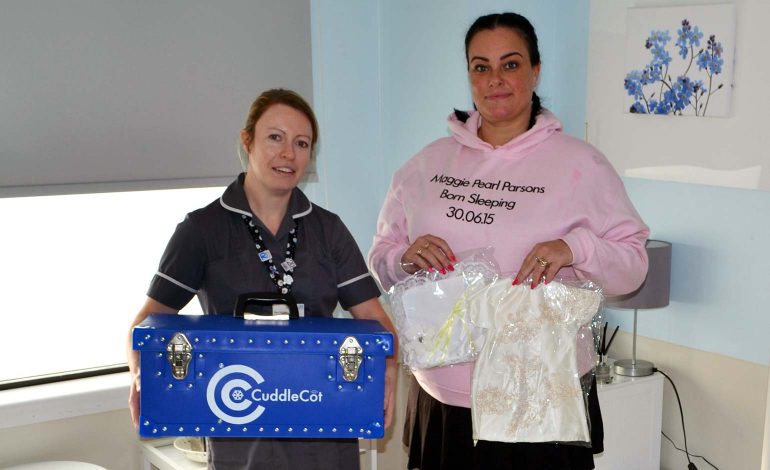 The cots are specially designed to keep stillborn babies cool, meaning that parents can spend more time with their babies in the hospital’s Forget Me Not bereavement suite or take their babies home with them for up to three days if they wish to.

The cots were donated to the RUH by Sarah Parsons, whose daughter Maggie Pearl Parsons was stillborn in 2015.

Following her daughter’s death, Sarah and her husband Mark, from Blackburn, launched the Maggie’s Stillbirth Legacy campaign, which raises funds for Cuddle Cots, gowns and blankets for hospitals across the country.

Sarah said: “The Cuddle Cots meant that we could have three days with Maggie after she died. It allowed us to spend time at home with her, reading and singing to her – time we wouldn’t have otherwise had.”

As well as donating the Cuddle Cots, Sarah also left a selection of blankets and gowns at the maternity unit which could be used for stillborn babies.

Bereavement Midwife Bex Walsh said: “Having a stillborn child is a devastating and traumatic experience for parents.

“The new Cuddle Cots will help parents spend time with their children in the privacy of their own home if they wish, and give them the opportunity to say a proper goodbye.

“We’re very grateful to Sarah for such a generous donation, which will help parents to spend time with their child and hopefully go some way to helping with the grieving process.”