A Bath GP says he is hopeful for the future of the NHS as he hangs up his stethoscope after 30 years. 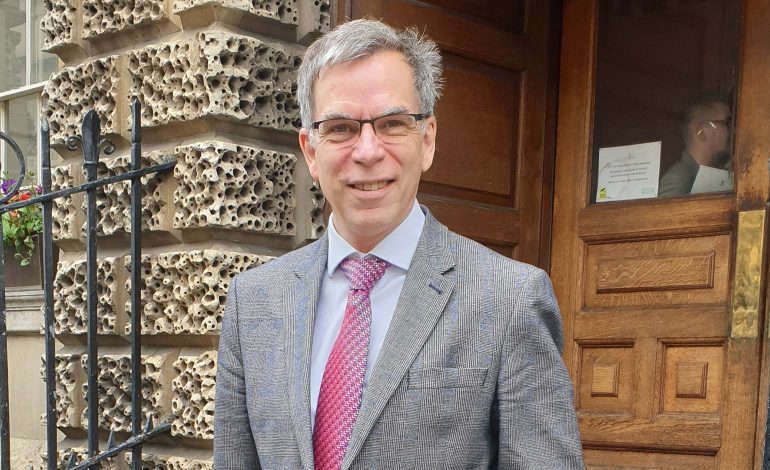 Dr Ian Orpen, who has retired after 30 years in Bath

Ian Orpen grew up between Surrey and Lincolnshire before he moved with his family to South Africa at the age of 12.

He spent 15 years there, including his training as a doctor, before he came to Bath in 1986.

“I always wanted to be a GP. I’m interested in people,” said Dr Orpen, who retired from St James’s Surgery on 14th June. “I enjoy getting to know people and the longer term relationships.

“When someone comes in you don’t need to say anything – there’s a whole load of stuff you know. It’s helpful in my job and patients appreciate it.

“You know them as a person, not just the condition they come in with.

“It’s a curious relationship. It’s not a friendship as such but there’s an interaction that makes it very gratifying and a hugely privileged job.

“You live alongside people from the mundane moments to the most distressing circumstances. You help them to navigate the health service.

“There’s a cohort I’ve seen for years – I was present at some patients’ births and seen them go on to become parents.”

Dr Orpen, who will stay on as the clinical chair of the Bath and North East Somerset clinical commissioning group, says that relationship is changing, however.

He said: “The profession has changed hugely in the last 30 years.

“There’s a much richer range of services in surgeries – physiotherapists, nurses, nurse, practitioners, pharmacists, paramedics. The broader range of skills is a good thing.

“The patients we see are much more complex now and have greater needs.

“The simple cases we used to see are now seen by other professionals, which is good news but means GPs are left seeing all the complex stuff.

“It makes good use of our skills but it is very taxing.

“The intensity of working has changed beyond all recognition. GPs are going further as a result, because there’s been a lack of investment in GPs over the last 10 to 15 years.”

The amount of paperwork has mounted up over the years and so the working day has grown longer and longer, with a 12-hour shift typical for Dr Orpen, four days a week. When he started he worked four and a half days a week, although the night shifts he was doing are a thing of the past.

He said: “There used to be quiet times in the middle of the day. Those don’t exist any more. We’re working flat out.

“The NHS has been slow to recognise the pressures on GPs. There are plans coming in but that should have happened 10 years ago.”

Asked how he thinks the role will change in the future, Dr Orpen said: “With the wide range of individuals taking on roles traditionally done by GPs, they are increasingly going to be seen as consultants in primary care.

“There are likely to appointments over Skype and consultations online. We already do a lot of phone consultations.

“I’m hopeful for the future of the NHS. We can’t underestimate the scale of the challenge.

“We had a good funding package last year but it wasn’t sufficient. The NHS would benefit from greater funding to make the changes it needs to make.

“Social care hasn’t been addressed yet.”

The pressures on primary care have not deterred Dr Orpen’s son, David, who is training to be a GP himself.

“My son made his own choice, and I’m delighted with it,” he said.

“His experience will be very different from mine, because the world has moved on.”

Dr Orpen and wife Annette, a retired physiotherapist, have another son, Mark, who is at university, and a daughter, Juliette, who works for the Refugee Council in London.

“I will absolutely miss my role as a GP,” he said. “I’ll miss the relationships with patients.

“I recognise what a privilege it’s been. It becomes more and more apparent as you go through the job.

“I hope I’ve done a good job for the patients I’ve served over the years.

“I’m looking forward to having more time to do things. I plan to re-enact my photography, do more travelling and maybe even take up golf.”