Plans for a £9million academic building at Bath College have suffered a major blow after the region’s council leaders pulled the plug on funding the ambitious project. 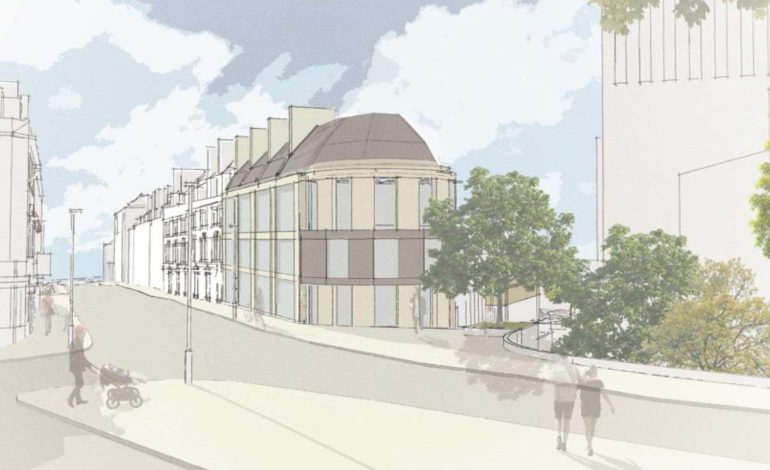 How the new innovation centre could look | Image © Bath College

Spiralling costs at the design stage have forced the West of England Combined Authority (WECA) to withdraw support for the proposed Digital and Creative Innovation Centre at the city centre campus.

But the college says it is still hopeful of securing the money from another government pot.

A report to WECA committee said: “A request has been received from Bath College seeking a further £300,000 through the Investment Fund to address identified cost pressures in progressing the Digital and Creative Innovation Centre project development to RIBA (Royal Institute of British Architects) stage 3 design taking the overall costs of this work up to £701,000.

“Given the costs of this project stage and the project overall have increased, and with the Local Growth Fund being fully committed and time-limited, there is no identified funding source to meet the expected £9.1million capital costs of implementation.

“Therefore, it is proposed this request is not supported and that funding of this project ceases.”

Members agreed with officers’ recommendation to decline the request for the extra cash at the meeting in Bristol City Hall on Friday, 20th March.

Bath College principal and CEO Laurel Penrose said after the meeting: “The Digital and Creative Innovation Centre development is a perfect solution for both regional and local priorities as well as local demand from students and employers.

“It is therefore a disappointment that this short-term setback has occurred, especially as the additional funding requested was to accommodate Weca’s criteria to achieve RIBA stage 3 and planning permission.

“However, the college remains undaunted and remains convinced that this is the best solution for our learners and employers, and in light of the recent government announcement of capital investment funds for FE Colleges, we are working with Weca and the local authority to prioritise the college accessing these monies, which would enable this project to be finalised.”

A WECA spokesman said: “The West of England Combined Authority and Local Enterprise Partnership has already invested £2.5million in Bath College’s new Catering and Hospitality Training Centre and £2.7million in its Construction Training Centre at the college’s Radstock campus.

“Weca is also in dialogue with the Government about funding support announced in the Budget 2020.

“The combined authority provided Investment Fund support to help the college develop an initial bid for a new centre, to see if it would be affordable and deliverable within the timescale set by the Government for allocating Local Growth Fund (LGF) money.

“Unfortunately, increasing costs and delays to the project meant it could no longer be funded through LGF, as LGF money needs to be used by March 2021”

Bath College submitted a planning application for the four-storey building in January.

The proposed 1,300sq m centre is set to replace an existing car park and plant room at the college’s northern boundary with St James’s Parade.

Revealing details of the plans in December, the college said: “The new building is required to enable the college to better meet the skills need for the digital and creative industries and provide specialist facilities which are not currently available to students, employers and small-to-medium enterprises in the locality.

“It is envisaged that the new building will comprise of innovation learning spaces, public spaces and pre-incubation spaces.

“Given that the proposed development is contained within the existing campus, it is not considered that the development will cause any detrimental impacts to existing residents or businesses.”