A feature-length documentary produced by the University of Bath about diamond mining in Sierra Leone has taken home a top UK film award, for the second time. 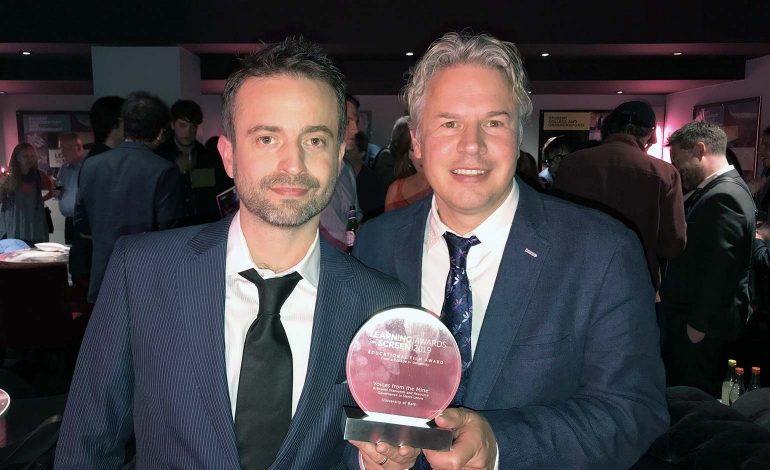 The accolade, presented for films produced with an educational purpose, is for their 2018 documentary ‘Voices from the mine: Artisanal diamonds and resource governance in Sierra Leone’.

The 33-minute film was shot on location in Sierra Leone and Belgium, to chronicle the journey of artisanal diamonds and the people involved, from the mine shaft right through to the shop window.

Diamonds are big business in Sierra Leone. Dispersed over terrain spanning some 8,000 square miles, almost a quarter of the entire country, an abundance of the precious, and extremely valuable, stones have made the diamond sector one of the country’s most lucrative foreign currency generators.

In the past, annual production has netted up to US$250 million, making the small West African country diamond rich bar none.

Yet, the country’s wealth in natural resources has not correlated into better living conditions for its people.

In fact, the opposite is been true. By UNDP standards, 60% of the country live under the poverty line, making it one of the world’s poorest nations.

Ravaged for years by a brutal civil war, fuelled by an illicit trade in diamonds, and battered more recently by Ebola, economic development has flat lined through a combination of mismanagement and misfortune.

Part of that story, Sierra Leone’s troubled relationship with diamonds, was told to a global audience 12 years ago in the Hollywood blockbuster, ‘Blood Diamond’, starring Leonardo DiCaprio.

The film focused global attention on the human cost of conflict diamonds and shone a spotlight on the Kimberley Process, the international certification scheme designed to eradicate them from the international market.

Dr Maconachie, from Bath’s Centre for Development Studies, explained: “When I talk to my students about my work on diamonds in Sierra Leone that’s always their first reaction – Blood Diamond.

“But where Blood Diamond successfully drew attention to conflict diamonds and really moved the agenda forward, it also overshadowed a whole set of other important issues that are impacting miners, the conditions they work in and the real benefits they accrue.”

His interests lie in value chains within the artisanal diamond sector, specifically the economic disparities that exist between those digging the diamonds out of the mine right at the bottom of the chain, and those at the top selling them at high-end European and North American jewellers.

He continued: “Film can be such a powerful way of exposing problems that remain invisible, and showing people visually that things are not always ok.

“It’s important to question and think in greater detail about what we are buying. And if we’re reaching out and getting people to reflect on where these diamonds are coming from, that’s a good outcome for the film.”

This is the second time Dr Maconachie and Simon Wharf have teamed up and been recognised with a national gong for their work. They were presented with the same award in 2017 for their film ‘Gender and Fairtrade’ exploring the lives of female cocoa farmers in Ghana.

Filmmaker from the University’s Audio Visual Unit with the Department of Computing Services Simon Wharf added: “Capturing the colours, textures and sounds of what I discovered to be a vibrant and welcoming country was an experience I will never forget.

“It is a great honour to receive this award in recognition of the film but also for the important stories we were able to tell through it of how an industry affects people’s lives.”

‘Voices of the Mine’, which was supported by US-based philanthropic organisation Humanity United, is currently being screened as part of the Unrestricted View film festival in London.

It will be premiered in May in Sierra Leone and also screened at the UN in New York.