Tech-savvy students tried their hand at computer coding, animation and blogging during a two-day event at Bath College last week, organised as part of the Bath Digital festival. 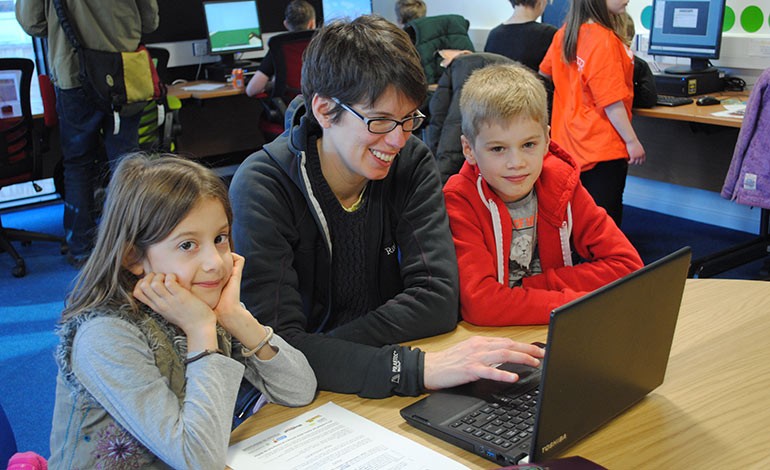 The event was open to college students, schoolchildren and young families.

Over 100 children from schools in the city visited the college to kick-start the event on the morning of Friday 12th February.

They took part in workshops, put together by technology experts to get them thinking about a career in the digital industry.

Pupils from Oldfield School, Wellsway and Beechen Cliff learnt about social media and Photoshop, as well as digital advertising and branding.

They also created a stop motion animation, inspired by a zombie chase, during a workshop run by the University of Gloucestershire.

Neil Oliver, who teaches ICT at Ralph Allen School, said: “It’s great to gain an insight into the less well-known areas they can go into.

“Already, we’ve heard from Ferox Security about cyber security, which is an industry we haven’t spoken about in our school.

“They seem pretty excited about it. It will be interesting to see what effect that has on our extracurricular clubs.

“It might highlight some of the different areas we could go into.”

In the afternoon, students from Bath College took part in a similar set of workshops and attended a ‘Get into Television Production’ question and answer session.

The 18-year-old, based in Gloucestershire, has his own company testing computer security at the age of 18.

He said: “We get paid to break into peoples’ network and improve their security. I was friends with a guy in primary school – he bought a laptop and we were really competitive, I had to break into the laptop and better him.

“It was good fun and at the end of it we were very good for our age at security. Now I’m making a living doing something that I love.

“It’s really nice to talk to people my age and hopefully inspire them. The younger generation, they have grown up with technology and they’re going to be the ones in the future finding new flaws and vulnerabilities.”

On Monday 15th February, Rosie Bennett, founder of the IT Girls Collaborative, organised a free games day for families at Bath College.

Visitors were invited to enter a Build Bath in Minecraft Competition, and had just 48 hours to build an imaginary landscape on a custom-built map.

Bath College students Georgina Hill and Barry Lewis, who are both studying for a foundation degree in computing, ran a gaming session.

Children met Glynn Hayward, from digital avatar company Bebods, and created their own avatar to use on a mobile app called Popjam.

They also had a go at controlling mini robots via a laptop, as part of an activity set up by John Bradford, from High Tech Bristol and Bath.

Mr Bradford said: “Whatever these children do in their final career it’s going to involve technology. It’s going to have to be part of their working life.

“It’s an opportunity for the kids to have a play, but also they can program the robots themselves. I run two community code clubs and I’m keen to run more in Bath.

“This is a chance for some of the people in Bath to see what we do.”

Bath College employability adviser Amy Patterson said: “It was good to open up the college to so many young people from around Bath to show the exciting opportunities in the digital sector and creative industry.

“The tech industry in Bristol and Bath is growing year on year and we know this sector is the future for many young people. At Bath College we like to do as much as we can to link our students to their future employers.”